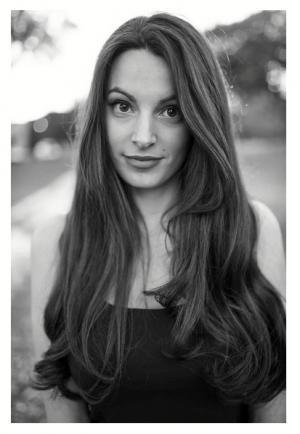 Jo Palazuelos-Krukowski is a doctoral candidate and Chancellor’s Fellow at the University of California, Santa Barbara. She holds a Bachelors in Anthropology from Grinnell College and a Masters in Interdisciplinary Theatre Studies from the University of Wisconsin-Madison, where she was an Advanced Opportunity Fellow and winner of the Mellon Foundation International Studies Grant.

Jo decided to pursue her doctorate after founding an expatriate theatre troupe in South Korea, where she has regularly presented her work as an actor and playwright. She has worked as a producer for the Peabody Award-winning storytelling nonprofit the Moth, as an assistant director for the Oregon Shakespeare Festival, and as a consultant for the Royal Shakespeare Company. Her research has been published by the RSC and by Bloomsbury.

Jo's doctoral research centers on spectrality, folklore, aurality, and cross-cultural theatre. Her dissertation focuses on constructions of the nation and representations of the ghost in mid-twentieth century Australian, American, and British horror radio. Her MA thesis “Ghosts of the Other” considered the performance of the supernatural in nineteenth century Japan as a vehicle for ideations of social justice on the late Edo kabuki stage. She is also interested in acting pedagogy (particularly the educational philosophies of Sanford Meisner and Viola Spolin) and the fostering of social ties and civic engagement through community performance.

Courses taught at UC-Santa Barbara include Introduction to Acting and Shakespeare in the Park through Isla Vista Arts and the Interdisciplinary Humanities Center. In 2020 she assistant directed Julie Fishell’s Tartuffe and Irwin Appel’s Julius Caesar and Antony & Cleopatra cross-over drama Immortal Longings. She also leads the undergraduate professional development organization ProLab at UCSB, which aims to empower young artists and prepare them for navigating the theater and entertainment industry after graduation.

Jo's work on ghost performance as a prism for articulating cultural constructions of belonging and nationhood was awarded the Kathryn Davis Fellowship for Peace in 2017. She was nominated for the Academic Senate’s Outstanding Teaching Assistant Award in spring 2020, and she was awarded UC-Santa Barbara’s Graduate Student Association’s Excellence in Teaching Award in 2019.