ALL UCSB STUDENTS ARE WELCOME AND ENCOURAGED TO AUDITION.

ONE DOES NOT NEED TO BE IN THE THEATER/DANCE DEPARTMENT TO AUDITION.

The Last Days of Judas Escariot:

Scripts and links for upcoming auditions

The scripts for auditions can be found below. You must use your UCSB email account to view them. If you use your personal Gmail account it will say that you need to ask permission which you will not recieve. Please note that the scripts cannot be downloaded nor printed. You must be logged into your ucsb google account to view.  Please do not share these scripts with anyone.

TO AUDITION For theater PRODUCTIONS YOU MUST:

1) SCROLL DOWN ON THIS PAGE TO READ ALL AUDITION INFORMATION

2) FILL OUT The AUDITION FORM (She wolf and Night night, Roger roger are the same for and you only need to fill it out once. Launch pad amplify reading Series festival is a seperate form):

3) Fill in your name on the aUDITION sIGN-uP sHEETS (FILL IN YOUR NAME IN EACH SHOW YOU ARE AUDITIONING FOR):

4) READ THE SCRIPTS PROVIDED AT THE TOP OF THIS PAGE

5) show up to your audition 10 minutes early and be prepared to stay until released by the directors.

TO AUDITION FOR Dance PRODUCTIONS YOU MUST:

1) SCROLL DOWN ON THIS PAGE TO READ ALL AUDITION INFORMATION

She Wolf: Margaret of Anjou

an adaptation of Shakespeare’s Henry VI

LAUNCH PAD is our new play development program. Professional playwrights are invited to campus to collaborate with students, faculty and guest artists on their new plays. We call this a “preview production” because it stays in previews all through the run so that writers can make changes to the script between the performances. For more info visit the LAUNCH PAD website.

We invite actors who identify as/with any gender, race, age, sexual orientation, disability or religious or political believe and affiliation to audition.

All enrolled UCSB students are encouraged to participate!

The current draft of the script is now available via the link at the top of this page.

As with any new play development process, the play is undergoing changes, and will continue to change throughout the process.

Any full time UCSB student is welcome and encouraged to audition.

Pick a short scene or speech from the play to perform. You do not need to memorize this scene, but it should be prepared well.

If you choose a scene, you should also choose a partner and prepare together. It is possible to have a partner who is not auditioning for the role that they read in the scene.

If you have questions or need more information, contact

A nation divided, an unending off-shore war, an ineffectual leader, insurrection, systemic racism, inequality, oh, and don’t forget the plague. Margaret of Anjou marries Henry the Sixth in an alliance meant to broker peace, but arrives in England with her Ladies-in-Waiting to discover a nation built on war without the tools to transition to anything else. Queen Margaret is one of Shakespeare’s most misaligned and complex female characters; SHE WOLF is a cheeky, ambitious, remarkably current retelling of her story.

Katie Bender is a playwright, performer, and theater maker. Her plays Still Now, The Fault and The Survivors/Los Sobrevivientes are filled with games, physical exertion, and a poetic delight in the mundane, each an unflinching examination of women facing impossible circumstances. Working with Underbelly, she co-created Slip River, Church of the Passionate Cat and an immersive adaptation of Alice in Wonderland commissioned by ZACH. With Mars and Reisman, she co-created NEXT YEAR PEOPLE which premiered at Fusebox 2019. Solo work includes Instructions for a Séance and Judith. Katie’s work has been developed and produced around the country at places like The Alley, Hyde Park Theater, Kitchen Dog, Icicle Creek and ZACH as well as The New Harmony Project, The Orchard Project, Shrewd Productions, The Hangar, EST, The Playwrights’ Center, The Orcas Center and UCSB's LAUNCH PAD to name a few. On the Kilroys List and a finalist for the inaugural Shakespeare’s Sister Fellowship, she has her MFA from the University of Texas and was a 2016/2017 Jerome Fellow and current Affiliated Writer at The Playwrights’ Center. She is over the moon to be back at LAUNCH PAD working on SHE WOLF.

All roles are open to actors of any ethnicity, race and/or gender.

Blanche, lady-in-waiting to Margaret, 20’s/30’s, an orphan, timid and obedient.

King Henry the Sixth, 25. Romantic, religious, not a great leader.

Mose, a beggar. In their 20’s. Tough, gruff, resourceful.

Quick to take offence, has a legitimate claim to the throne, waiting for his time.

We invite actors who identify as/with any gender, race, age, sexual orientation, disability, or religious or political belief and affiliation to audition. All enrolled UCSB students are encouraged to participate!

Any full time UCSB student is welcome and encouraged to audition

Please prepare the following for your acting audition.

Please prepare ONE scene (with a partner) or ONE speech from the play of your own choosing that is no more than 2 minutes in length. The text need not be memorized, but please be very familiar with it and thoroughly invest yourself in the language, situation, and needs of the character.

Please prepare to share a magical dream or memory from your own life that involved an important person in your life. Approx. one minute in length.

ACTORS WITH THESE SPECIAL SKILLS

PLEASE BRING EQUIPMENT AND/OR AN INSTRUMENT TO THE GENERAL AUDITION

It's midnight, but that doesn't mean the world slows down. "Night Night, Roger Roger" by current UCSB undergraduate playwright Roni Ragone is a comedic fanciful play about the world after the sun goes down. Roller skating Nanas, kids with tin cans, literary obsessed vampires, clumsy security guards, kids without tin cans, quirky game show hosts, and more. This play is a plea for every person to stop growing up so fast. Take your moment with the universe and enjoy it.

The Moony - AG, Ageless, Freddie's monster in the closet, looking over her, a protector of dreams and thoughts, a maternal figure with a big personality and a New York or other big city accent

Nolan - AG, 25+, works as a security guard at the history museum with Zach, Vee's cousin, does the bare minimum for her night shifts.

Zach - M, 20, works as a security guard at the history museum with Nolan, a mess but a nice one.

Vladimir - AG, Ageless (but the oldest of the clan), a mean vampire, has a strong Transylvanian meets valley girl accent.

Ian the Landlord - AG, Adult, the building's landlord, the amount he puts up with on a daily basis is truly amazing.

Please read the scripts and carefully pick material (short scene or speech) no more than two minutes total to perform from ANY of the plays. You may choose from more than one play as long as you don’t exceed the time limit. You do not need to memorize this material, but it should be well-prepared. In the casting breakdowns, the playwrights have clarified the gender, race and ethnicity of actors required for each role. Please bear this in mind as you choose your material.

If you choose a scene with another character, you may choose a scene partner and prepare and arrive together. Please note that your scene partner does not have to be auditioning for the character in your scene. For example:  if you want to do a DAHLIA scene, the actor reading the other role does not need to be auditioning for that role. A reader will also be provided if you do not have a partner.

Selections should be no more than 2 minutes TOTAL. Time your scenes please.

DANCE AND THEATER MAJORS WORKING ON CLASS CURRICULUM ONLY.

Not a major or working on something for a club? Be sure to get written approval from Daniel Herrera (daniel12@ucsb.edu) prior to booking a room.

Steps for booking a room: 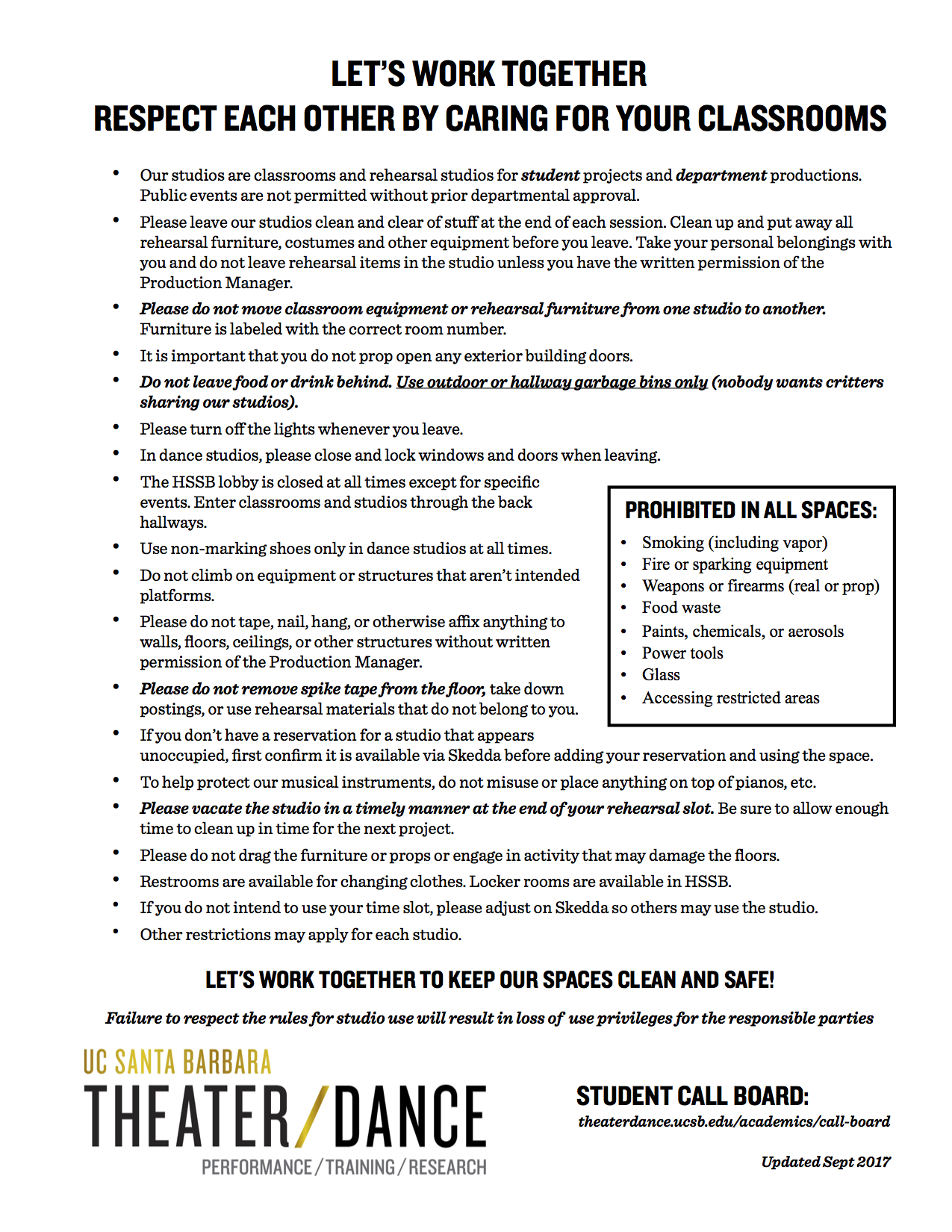 Looking to book a room further out than a week or on a re-occuring basis? Email dherrera@theaterdance.ucsb.edu.

POSITIONS AVAILABLE (DEPENDS ON THE PRODUCTION)

HOW TO APPLY FOR RUN OR WARDROBE CREW:

In order to see the specific dates and times of the shows, go to the following link to view the crew calendars. Each show has its own calendar to view.

Want to be more involved with the Department? Want to see shows for free? Volunteer to be an usher for one of our shows!

WHAT: As an usher for the department's productions, you will be asked to hand out programs before the show, direct audience members to facilities during intermission, and organize the venue after the performance.

WHEN: Ushers should arrive 45 minutes PRIOR to curtain at the VENUE of the performance and check in with the house manager for instructions and a brief training session.

WHY: For ushering, students may see the performance at no charge. It is possible (though not likely) that ushers will be asked to attend another performance if seating is very limited.

HOW: Use the buttons below to to sign up! You will be asked to enter your email address so that we can send you a reminder. Be advised that sign ups are on a first come, first served basis.

Email Sean at sposh@ucsb.edu with your @ucsb.edu address and the subject "Please add me to the Mailing List." The Mailing List will have the latest information regarding department events such as auditions, run/wardrobe crew, and special events.

Props and furniture are available for rental to the following:

Rentals are available by appointment only. To make an appointment email Devin Gee at dgee@ucsb.edu. A $50 deposit check is required for all rentals.