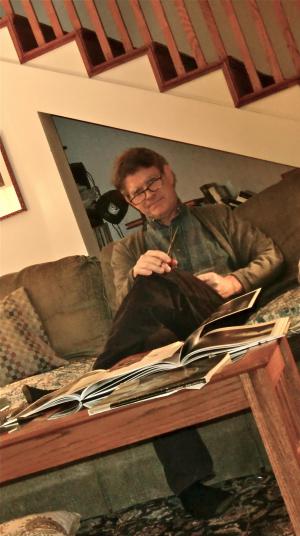 Teaches theater history, dramatic theory, dramaturgy, and dramatic literature, specializing in English and American, as well as ancient Greek drama and European modern. His THTR 1--Play Analysis is a foundational course for majors in the department. Among American topics his interests range from melodrama to avant-garde performance, from the classic or canonical to the utterly obscure and subversive. His study of Agnes Boulton and her marriage to Eugene O'Neill began with “A Wind Is Rising”: The Correspondence of Agnes Boulton and Eugene O’Neill (2000) and came to a head with Another Part of a Long Story: Literary Traces of Eugene O’Neill and Agnes Boulton, which came out in 2010 from the University of Michigan Press. His new edition of Boulton’s Part of a Long Story was published by McFarland in 2012. He wrote the first-ever critical edition of O'Neill's Long Day's Journey Into Night for Yale University Press in 2014, followed by an enhanced e-book--a multimedia edition--in 2016. The latter won the 2017 PROSE award in Literature. His critical edition of The Iceman Cometh was published by Yale University Press in 2020. His current book project is The Days and Nights of Long Day's Joureny Into Night: Eugene O'Neill and Carlotta Monterey O'Neill at Tao House. For six years he was the editor of the Eugene O’Neill Review, a biannual journal published by Pennsylvania State University Press. He was dramaturg of the production of Long Day's Journey Into Night at the Geffen Playhouse in Los Angeles, and items from his O'Neill collection formed an exhibit in the Geffen lobby. He has also worked as dramaturg to several O'Neill productions at Tao House, including The Great God Brown, Hughie, and Long Day's Journey Into Night. Previous books include: Henry Irving’s “Waterloo” (winner of the 1993 Callaway Prize) and Writing Wrongs: The Work of Wallace Shawn (1998). He is the author of Collections of Nothing (University of Chicago Press)—part memoir, part essay on the practice of collecting—and is at work on another book on the aesthetics, morality, and pathology of collecting and collage. He has also written two plays that emerged from his interest in collecting: Collections of Nothing More or Less and Collections of Nothing Enough Is Enough. His collections were on exhibit at the UCSB Library through the entire period of the pandemic--largely unseen except in this video tour. He is also fascinated by the portrayal of darkness and sixth sense on the 19th-century stage, encompassing performances of mesmerism, spiritualism, and science, as well as drama.

The Real Story Told (about storytelling); The "Course" of Drama (about the heritage of plays); "Difficult American Drama"; Acting American; Teaching American; The Roots of Broadway; Greek Tragedy in Performance, Translation, and Adaptation; Dramatic Theory: The Iron Age to Frye and Beyond; Tragicomedy; Eugene O'Neill; Melodrama; Anton Chekhov; History of Avant-Garde Performance.

In the works, something called The Museum of Nothing.

Part of a Long Story: Eugene O'Neill as a Young Man in Love by Agnes Boulton, edited by William Davies King (2011)

Another Part of a Long Story: Literary Traces of Eugene O’Neill and Agnes Boulton (2010)

"A Wind Is Rising": Correspondence of Eugene O'Neill and Agnes Boulton (2000)

THTR 180B--American Drama and Theater from 1940 to the Present