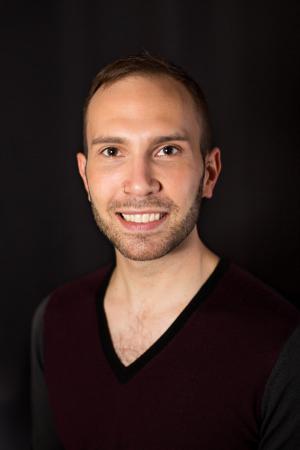 BFA - University of North Carolina School of the Arts,Winston-Salem, NC

Brandon Whited (dancer, choreographer, teacher, maker)—born in Poughkeepsie, NY— began dancing at the age of ten after his family moved to North Carolina. He received both his HS diploma and BFA from the University of North Carolina School of the Arts under a brilliant and inspiring faculty. In addition to training based in the Cunningham, Limón and Nikolais techniques, Brandon was exposed to a strong supplement of guest teacher-choreographers, which informed his eclectic approach to contemporary technique—grounded in traditional modern dance.

Returning to his roots in New York, Brandon danced professionally with Steeledance (Teri and Oliver Steele), Randy James Dance Works, Daniel Gwirtzman Dance Company, danscores by Ofelia Loret de Mola, and as a specialized supernumerary with the Metropolitan Opera.  In 2008 he joined Shen Wei Dance Arts as an apprentice and became a core member from 2009-2014.  During that period, Brandon toured Shen Wei’s rich repertory, domestically and internationally, and originated roles in four works— Re-III (2009), Limited States (2010), Undivided/Divided (2011) and Collective Measures (2013).

In addition to his work in contemporary dance, Brandon has worked in Musical Theatre as both a performer and choreographer—with productions in North Carolina for the Cape Fear Regional Theater (Choreographer: The 25th Annual Putman County Spelling Bee; Co-Choreographer: High School Musical, Fame; Asst. Choreographer: The Music Man), and in NYC for the Purple Repertory Theatre Company (Choreographer: The All-American Genderf*ck Cabaret, and The un-Marrying Project).

Following his professional career, Brandon received his MFA as a Distinguished University Fellow from The Ohio State University.  His research lies at the intersection of gender/queer theory, dance theatre and contemporary dance.  Cipher XY (2015) considered the range of male/masculine gender identity, expression and representation through choreographic process and the community-building dynamic of work in the studio.  Through interview, discussion and movement investigation, Brandon, and his cast of dancers (constituting a range of male/masculine gender identities) presented the full work in autumn of 2015. Excerpts of the dance were also presented at the Rochester Fringe Festival (2015), and the Ohio Dance Festival (2016).  His earlier work Sonata In A-Minor (2014)—a duet for two men, resonating on the motion in stillness of Renaissance sculpture—was presented at OSU’s Barnett Theatre as part of the 2015 Winter Concert, and at Ohio University as part of ACDA the same year.  That spring, Brandon was commissioned to choreograph a dance rooted in the social dances of the Ragtime era as part of “Drums Downtown,” a collaborative concert between the School of Music (Percussion Ensemble) and the Department of Dance at The Ohio State University.  The resulting work, Ragtime Suite (2015), was a light-hearted romp, grounded in Foxtrot and Charleston dances, and performed to live Ragtime Xylophone and Marimba.

Brandon’s teaching focus is centered around contemporary technique, rooted in tradition, yet informed by Shen Wei’s “Natural Body Development Technique,” somatics, and improvisation.  His class focuses on qualitative range, support of the breath, supple articulation of the spine and limbs—for sequentiality, articulation, efficiency and supported release—and use of weight and momentum for dynamic movement through space.  Brandon’s teaching practice also encompasses composition, improvisation, social dance and multiple forms of dance partnering.  Drawing on the principles of ballet and contemporary partnering, contact improvisation and ballroom dance and identifying their middle ground, he is developing the idea of an Integrated Partnering to create a versatile base of partnering knowledge and skill, for students to draw from.

Recent choreographic research projects include Boys Like Us, a duet for two professional dancers based in Los Angeles, that continued Mr. Whited's lines of inquiry into men’s/masculinities studies—in this case taking a look at coming coming of age as a gay man with its confusion, isolation, and longing for connection. Drawing on a shared history of more than twelve years, he joined Tammy Carrasco (Asst. Prof. of Dance, SUNY Brockport), and Fulbright scholar and visual artist/photographer Kitty Hubbard (Assoc. Prof. of Photography/Visual Art) in The Structure of Us. A multidisciplinary art installation/performance – in both the Rochester Fringe Festival, and the Charm City (Baltimore) Fringe in Autumn 2017. Additionally, Brandon will presented another sitespecific, improvisational performance, Loro Sono Loro/They are Them with long time dance partner and collaborator Sarah Lisette Chiesa, at the Mutty Gallery in Castiglione delle Stiviere, Italy, and Parma University’s Centro Studi e Archivio della Comunicazione in December 2017. In Fall 2018, Brandon restaged Shen Wei’s Re-III for UCSB’s Fall Faculty Dance Concert, and in Spring 2019 for Sam Houston State University in Huntsville, TX. Most recently, Prof. Whited premiered a new work, 95 North, commissioned by Santa Barbara Dance Theater for their 2019 spring season at the Lobero Theater in downtown Santa Barbara.