Use the button below to RSVP for the show you would like to attend. 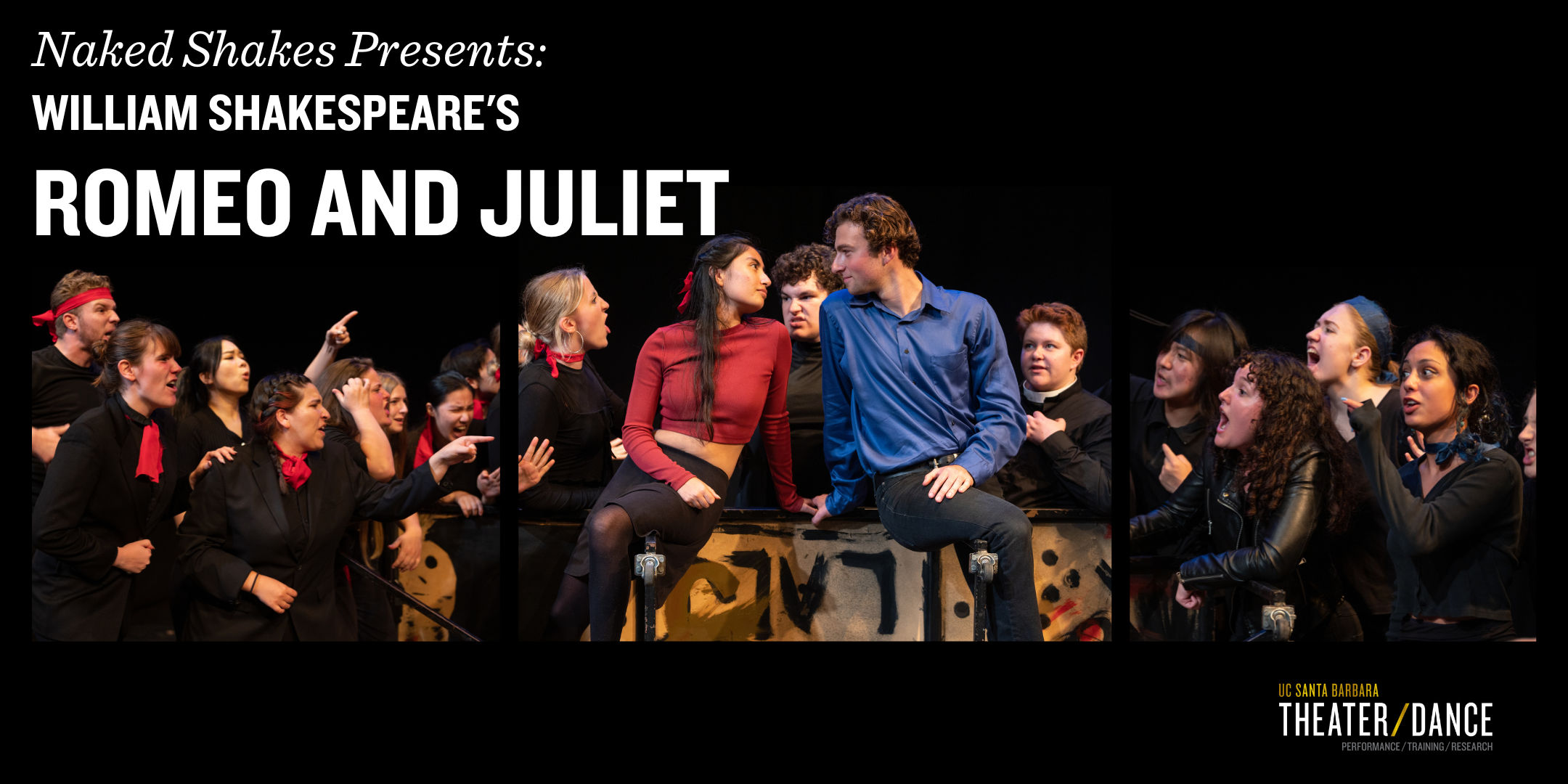 Everyone knows how the story goes… “Two households… in fair Verona…a pair of star crossed lovers…” But how does the classic tale take shape in our modern society? This Summer, UCSB Department of Theater/Dance Chair, and Naked Shakes director, Irwin Appel, answers this question as he will present a contemporary adaptation of Romeo and Juliet in UCSB’s Studio Theater, September 1 – 7, 2022.

Since 2006, Irwin Appel and Naked Shakes have presented energetic, exciting, raw, vibrant Shakespeare, harnessing the power of the actors and the language. The critically acclaimed, award-winning Naked Shakes has performed at UCSB and transported productions throughout Santa Barbara, over to Southwest Shakespeare Company at Taliesin West in Scottsdale, AZ, and the Shakespeare Center of Los Angeles. Naked Shakes believes in the transformation of the actor and the space, along with the imaginative ability of the audience. Each play is presented clearly and directly so that the audience inhabits the imaginative world of the play through Shakespeare’s language.

“There are so many dualities within the world of Romeo and Juliet, and they clearly reflect many of the dualities we witness in our own modern society,” says director Irwin Appel when asked what inspired him to bring Romeo and Juliet to the Naked Shakes stage. Appel shares, “I am excited to discover the nuances of this story alongside the actors, and to see how together, we can bring this play into the contemporary world with current music and costumes.”

Experience this timeless story that uplifts the transformative power of true love, and breaks down the barriers of division between communities, families, and ourselves. Audiences will not want to miss this first performance of the UCSB Department of Theater/Dance’s 2022-2023 Season. 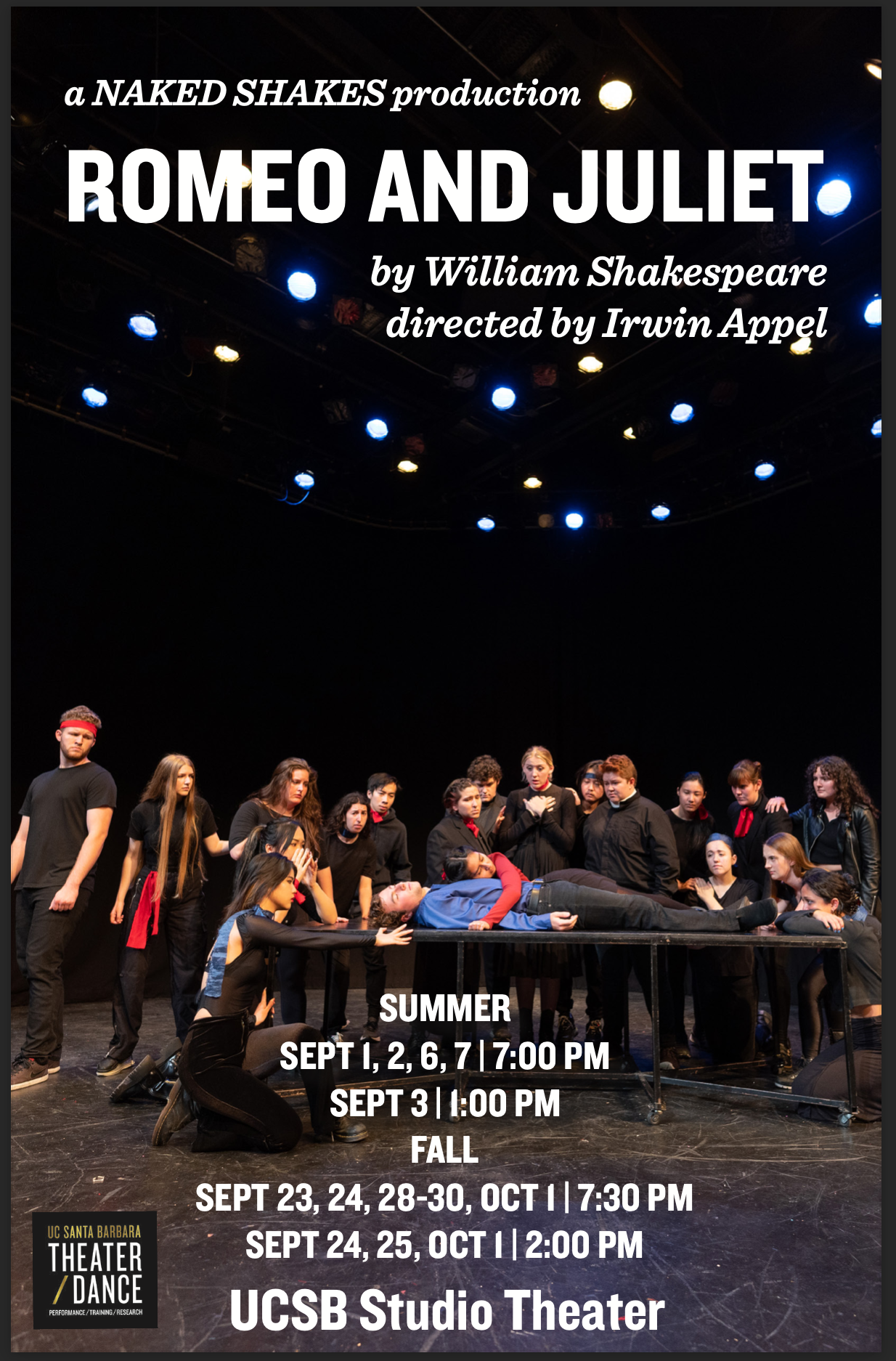 Romeo and Juliet will be presented indoors in UCSB's Studio Theater. In order to provide a safe and welcoming environment for our audience and performers, we are strongly encouraging audience members to wear their masks while they are inside the Studio Theater.

Health protocols for 2022-2023 events will be determined in conjunction with evolving state, local and university guidelines, and are subject to change.

NAKED SHAKES is now in its fifteenth season at UCSB, and its mission since 2006 has been to present energetic, exciting, raw, vibrant Shakespeare using the power of the actors and the language. The critically acclaimed, Santa Barbara Independent Award-winning NAKED SHAKES has performed at UCSB and transported productions to Taliesin West and the Southwest Shakespeare Company in Arizona, the Shakespeare Center of Los Angeles, and Center Stage in downtown Santa Barbara. Past productions include: The Winter’s Tale, Hamlet, Much Ado About Nothing, A Midsummer Night’s Dream, The Tempest, Twelfth Night, Romeo and Juliet, The Merchant of Venice, Measure for Measure and the 10th-anniversary epic two-play event, The Death of Kings, which garnered six Santa Barbara Independent and seven BroadwayWorld awards for adaptation, direction, design, and performance. The Death of Kings: Seize the Crown, a condensed version of the two original plays, premiered in Summer 2017 at the Prague Shakespeare Company in Prague, Czech Republic and again in 2019 at Taliesin West.
NAKED SHAKES believes in the transformation of the actor and the space, along with the imaginative ability of the audience. Each play is presented clearly and directly so that the audience inhabits the imaginative world of the play through Shakespeare’s language. The barren physical theater space is very important to the NAKED SHAKES concept; it takes on the identity of whatever locale or particular piece of poetic language is described, and yet always reminds the audience they are in a theater. When Prospero in The Tempest describes “the great Globe itself,” he is not only referring to the entire Earth, but also the “Globe” Theater – Shakespeare’s theater. That duality is what NAKED SHAKES is all about.
2020 was the first year NAKED SHAKES presented a production online rather than in person. Although this presented many challenges, our view was that out of adversity comes opportunity, and NAKED SHAKES was excited to be part of the beginnings of a new art form. However, this performance of NAKED SHAKES marks the first in-person perfromance in the last 18 months in the Department of Theater and Dance. The NAKED SHAKES principles remain the same: we hope to provide a powerful, absorbing and dynamic presentation of Shakespeare’s plays based on the passions and skills of the actors and words.