In a seemingly hopelessly divided country and world, Romeo and Juliet is a play for our time. The prologue warns us of the tragic ending and the demise of the “star-crossed lovers.” It is only by the death of Romeo and Juliet, can the divisions in the community begin to heal. Is this play a warning and harbinger for our own society? 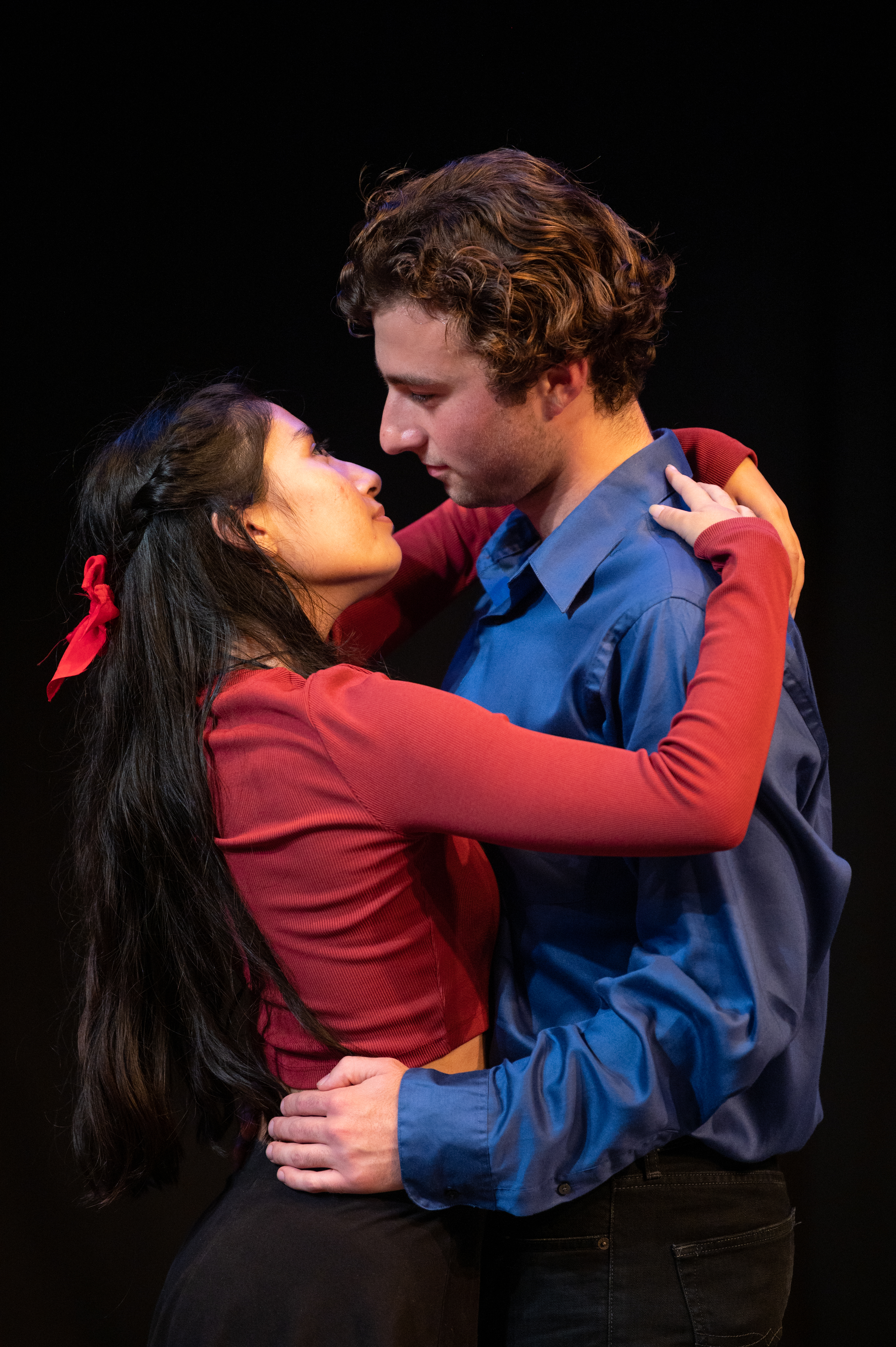 Audiences have been raving for the latest production from Irwin Appel and Naked Shakes. Take a look at this article published by the UCSB Current, previewing our Summer run of Romeo and Juliet. We are thrilled to bring back this production for a Fall Quarter run, and invite students, staff, faculty, and community members to join us as we dive back into this timeless, and deeply relatable world. 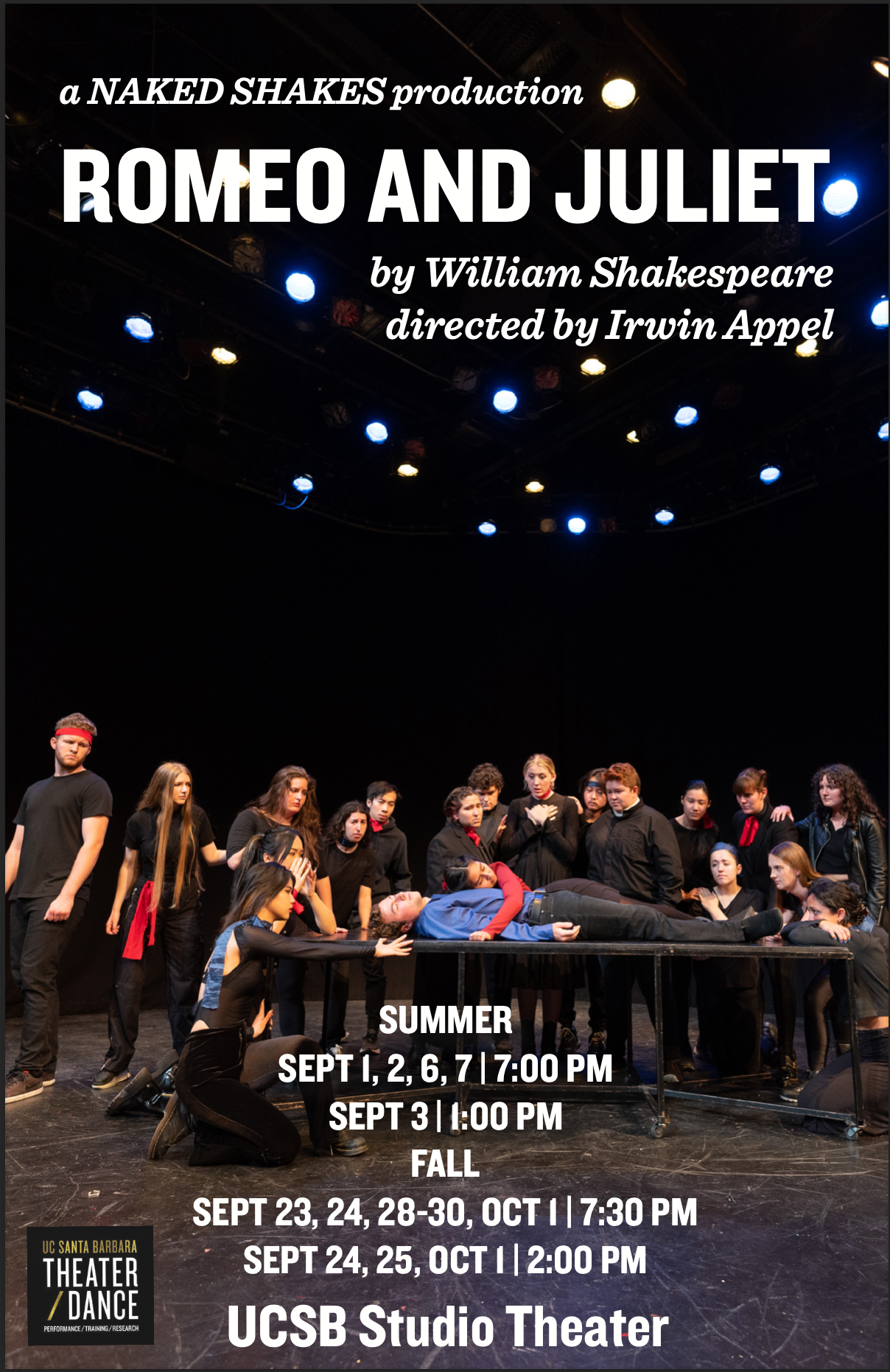 William Shakespeare (bapt. 26 April 1564 – 23 April 1616) was an English playwright, poet, and actor, widely regarded as the greatest writer in the English language and the world's greatest dramatist. He is often called England's national poet and the "Bard of Avon" (or simply "the Bard"). His extant works, including collaborations, consist of some 39 plays, 154 sonnets, three long narrative poems, and a few other verses, some of uncertain authorship. His plays have been translated into every major living language and are performed more often than those of any other playwright. They also continue to be studied and reinterpreted.

He is also artistic director of NAKED SHAKES, producing award-winning Shakespearean productions at UCSB and traveling to downtown Santa Barbara and Los Angeles since 2006. Directing credits at many theaters include: Equivocation, Macbeth, A Streetcar Named Desire, The Merchant of Venice, Anowa, Hamlet (SB Indy Award), Measure for Measure, Romeo and Juliet, Rabbit Hole, Twelfth Night, The Winter's Tale (SB Indy Award), Seagull, The Tempest, Angels in America, Three Sisters, Comedy of Errors, Pentecost, A View from the Bridge (SB Indy Award), The Cherry Orchard, Speed-the-Plow, A Midsummer Night's Dream, The Crucible, The Countess, Madwoman of Chaillot, Sylvia, Much Ado About Nothing and the world premiere of Brown Baby (SB Indy Award for his sound design). He also directed twice for the National Theatre Conservatory at the Denver Center for the Performing Arts.

Since 2006, the mission of Naked Shakes has been to present energetic, exciting, raw, vibrant Shakespeare using the power of the actors and the language. The critically acclaimed, award-winning Naked Shakes has performed at UCSB and transported productions to Southwest Shakespeare Company at Taliesin West in Scottsdale, AZ, the Shakespeare Center of Los Angeles, Westmont College and Center Stage in downtown Santa Barbara. Past Naked Shakes productions include: 2021’s outdoor production of Twelfth Night, the premiere of Immortal Longings, an adaptation of Shakespeare’s Julius Caesar, Antony and Cleopatra and Shaw’s Caesar and Cleopatra, the premiere of The Death of Kings, a two-part adaptation of Shakespeare’s history plays, Hamlet, King Lear, A Midsummer Night’s Dream, Macbeth, The Winter’s Tale, Measure for Measure, The Merchant of Venice, and The Tempest.

Naked Shakes derives its rather provocative name from the principle that an actor in a bare theatrical space, along with meticulous attention to language, few technical elements and the collective imagination of the audience, can create what Prospero in The Tempest calls “rough magic,” hopefully revealing the heart, meaning, driving force and a fresh re-interpretation of a Shakespearean play. With the inspiration and creative power of our choreographers and designers, Naked Shakes blends wild, actor-generated theatricality with razor sharp attention to language and imagery.  As an audience member, one may, at times, experience a veritable visual feast while also being able to close one’s eyes and absorb the sound and text as if one were listening to a radio play or podcast. The barren physical theater space is very important to the Naked Shakes concept; it takes on the identity of whatever locale or particular piece of poetic language is described, and yet always reminds the audience they are in a theater.  When Prospero in The Tempest describes “the great Globe itself,” he is not only referring to the entire Earth, but also the “Globe” Theater – Shakespeare’s theater.  That duality is what Naked Shakes is all about.

A note about casting: Naked Shakes believes strongly in giving young actors the opportunity to stretch themselves and play characters they might not normally get to play in the “real world.”  Our Naked Shakes cast is comprised of students from two summer courses, THTR 144A and 144B, and has actors of all experience levels.  All that is necessary is a desire to study a great play and have an adventurous, exciting theatrical experience. Some of our actors are non-majors, and some are members of our prestigious Bachelor of Fine Arts (BFA) Actor Training Program, the only three-year actor training program in the entire UC system.  If you are interested in participating, or in learning more about Naked Shakes or the UCSB Department of Theater and Dance, please contact Irwin Appel at appel@theaterdance.ucsb.edu.

Naked Shakes is a proud member of the Shakespeare Theatre Association (STA). STA was established to provide a forum for the artistic, managerial, educational leadership for theatres primarily involved with the production of the works of William Shakespeare; to discuss issues and methods of work, resources, and information; and to act as an advocate for Shakespearean productions and training. STA has over 115 member organizations located throughout the United States and all over the world.