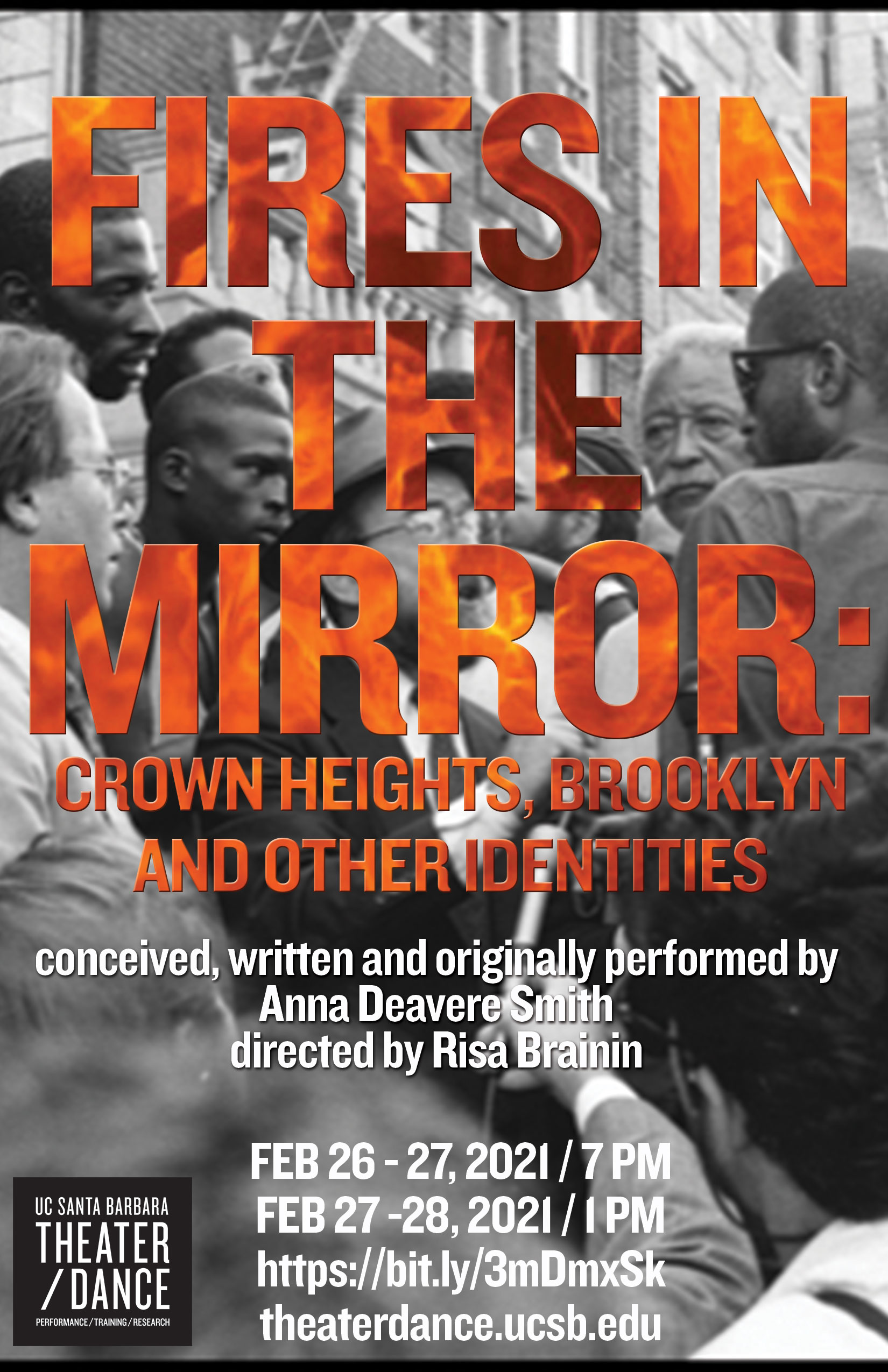 There are three sides to every story: yours, mine and the truth. Following the deaths of a Black American boy and a young Orthodox Jewish scholar in the summer of 1991, underlying racial tensions in the nestled community of Crown Heights, Brooklyn erupted into civil outbreak. Fires in the Mirror was Anna Deavere Smith’s groundbreaking response. Birthed from a series of interviews with over fifty members of the Jewish and Black communities, the Drama Desk award-winning work translated their voices verbatim, and in the process revolutionized the genre of documentary theatre. (Original Copy)

Playwright, actor, and educator Anna Deavere Smith uses her singular brand of theatre to explore issues of community, character, and diversity in America. The MacArthur Foundation honored Smith with the “Genius” Fellowship for creating “a new form of theatre — a blend of theatrical art, social commentary, journalism, and intimate reverie.”

Best known for crafting more than 15 one-woman shows drawn from hundreds of interviews, Smith turns these conversations into scripts and transforms herself onstage into an astonishing number of characters. In her speaking events, Smith discusses the many “complex identities of America,” and interweaves her discussions with portrayals of people she has interviewed to illustrate the diversity of emotions and points of view on controversial issues.

In 2012, Smith was awarded the National Humanities Medal, presented by President Obama and in 2015, she was named the Jefferson Lecturer, the nation’s highest honor in the humanities. She also is the recipient of the prestigious Dorothy and Lillian Gish Prize, a Guggenheim Fellowship, and most recently, the 2017 Ridenhour Courage Prize and the George Polk Career Award for authentic journalism.

Smith’s breakthrough plays, Fires in the Mirror, a runner-up for the Pulitzer Prize, and the Tony-nominated Twilight: Los Angeles, tackle issues of race and social inequality that have become touchstones of her work. Her portrayals of patients and medical professionals in Let Me Down Easy delivered a vivid look at healthcare in the United States. The show aired on PBS’ Great Performances.

Currently, Smith appears on ABC’s hit series Black-ish and the ABC legal drama For the People. She is probably most recognizable as the hospital administrator on Showtime’s Nurse Jackie and the National Security Advisor on NBC’s The West Wing. Her films include The American President, Rachel Getting Married, and Philadelphia.

Smith is the founding director of the Institute on the Arts and Civic Dialogue, which was launched at Harvard University and is now housed at New York University, where she is a Professor at Tisch School of the Arts. Her books include Letters to a Young Artist and Talk to Me: Listening Between the Lines.

She has been an Artist-in-Residence at MTV Networks, the Ford Foundation, and Grace Cathedral in San Francisco. Smith was appointed to Bloomberg Philanthropies’ 2017 U.S. Mayors Challenge Committee, a nationwide competition urging innovative solutions for the toughest issues confronting U.S. cities. She holds honorary degrees from Yale, the University of Pennsylvania, and Julliard, among others.

Risa Brainin is a freelance director and Founder/Artistic Director of the groundbreaking new play development program LAUNCH PAD at UCSB.

A graduate of the Carnegie-Mellon University Drama Program, Brainin served as President of the Board of Trustees of the National Theatre Conference and was recently inducted into the College of Fellows of the American Theatre for her distinguished contribution to theatre in the United States. www.risabrainin.com (Pronouns: she, her, hers) 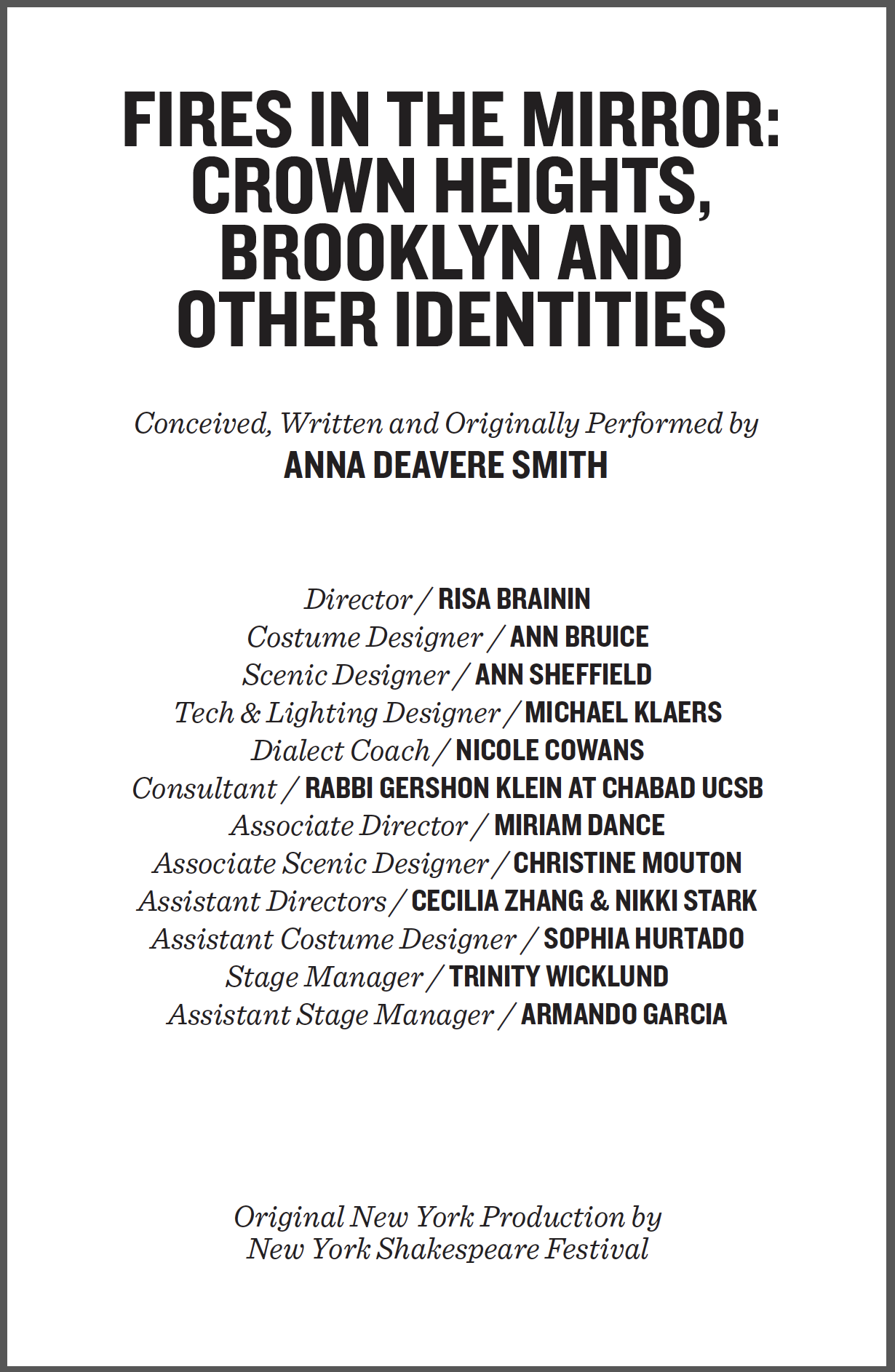