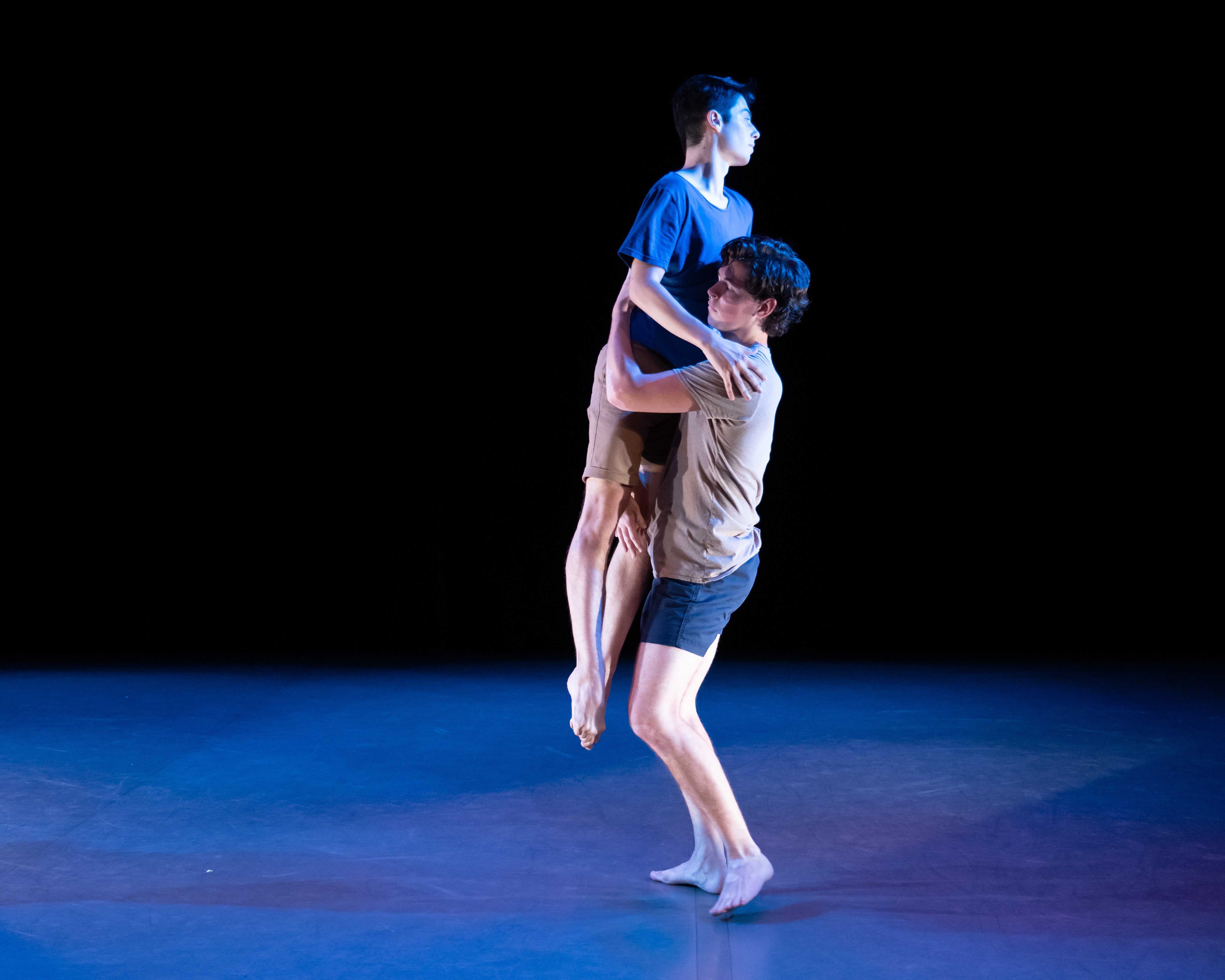 Boys Like Us is an evening-length dance piece that reflects on the process of coming-of-age and ‘coming out’ as a gay/queer person. Through pedestrian movement, improvisation and intimate/physical interaction, the dance resonates on a human need for touch, the exploration of new and burgeoning sexual expression, and the process of forming and evolving identity. Drawing from choreographer's own experiences in these processes, while in conversation with the dancers about their own positionality and experiences, Boys Like Us tries to abstractly reflect through embodied expression, the physical and emotional implications of gender policing, and socially limited access to one another as gay/queer men/people.

Featuring Sergio Barrientos, Andrew Bauer, Guillermo Castro, Elijah Hahn-Smith, EzraNolan Spencer, and Colin Sneddon, this iteration of Boys Like Us is an expansion of the original duet version developed with Sam Wentz and Ryan Walker Page which had its premiere at Highways Performance Space in August 2018. With more time for development, and a larger group of dancers, the work expands upon the original with an even more multi-faceted expression of the very different experience, dynamics and process of coming out and self-actualization.

This premiere performance is made possible by funding from the UCSB Academic Senate Faculty Research Grant.

About the Concert Director

BRANDON WHITED (DIRECTOR/CHOREOGRAPHER, he/him/his) - born in Poughkeepsie, NY - began dancing at the age of ten after his family moved to North Carolina, with early training in tap, jazz, ballet, lyrical, clogging and Hip-Hop. He received his High School diploma and BFA from the University of North Carolina School of the Arts under a brilliant and inspiring faculty. In addition to training based in the Cunningham, Limón and Nikolais techniques, Brandon was exposed to a strong supplement of guest teacher-choreographers, which informed his eclectic approach to contemporary dance technique - grounded in traditional modern dance.

Following his professional career, Brandon received his MFA as a Distinguished University Fellow from The Ohio State University. His research there considered the intersection of masculinities studies/queer theory, dance studies and contemporary dance choreography. Cipher XY (2015), his MFA Thesis Project, examined a range of male/masculine gender identity, expression and representation through collaborative choreographic process, interview and discussion with the dancers.

Prof. Whited’s choreography has been presented domestically in New York, Maryland, Ohio, Texas, Washington and California, and internationally in Italy. Recent projects include the duet version of Boys Like Us (2018) which premiered at Highways Performance Space in Santa Monica, CA. Structure of Us (2017) - presented in both the Rochester Fringe Festival, and the Charm City (Baltimore) Fringe - was a collaborative, interdisciplinary improvisation-based installation performance with Tammy Carrasco (Asst. Prof. of Dance, SUNY Brockport), and Fulbright scholar and visual artist/photographer Kitty Hubbard (Assoc. Prof. of Photography/Visual Art). Loro Sono Loro/They are Them, a collaboration with Sarah Lisette Chiesa was presented

in December of 2017 in galleries in both Parma and Castiglione delle Stiviere, Italy. Locally, Prof. Whited has created two works, Petit Pas (2017), and 95 North (2019) for Santa Barbara Dance Theater, and both dances were presented this fall in Dance Gallery Festival in Texas and New York City, respectively.

SERGIO BARRIENTOS (DANCER, he/him/his), from Simi Valley, CA, began his dance training at the age of 15 and graduated from UCSB with a BFA in Dance in Spring 2019. During his time here he was fortunate enough to work with many faculty and guest artists, including Monica Bill Barnes, Jacqulyn Buglisi, Doug Elkins, Ephrat Asherie, and works by José Limón reconstructed by Alice Condodina. He is currently dancing his third consecutive year with the UCSB Dance Company.

ANDREW BAUER (DANCER, he/him/his) is a second-year student at UCSB double majoring in dance and linguistics. Andrew comes from a quaint peninsula in southern California named Palos Verdes, where he spent most of his teen years working and refining his technique at the Peninsula School of Performing Arts. He furthered his dance training by joining his high school’s dance team, where he competed in contemporary, jazz, and hip hop styles. This love for dance team performance transitioned into college, where you can now see him getting down and dirty, at basketball and soccer games representing the UCSB Dance Team! This is Andrew’s first big show on the Hatlen stage, and he’s beyond thrilled to get to share the space with such driven and inspirational artists.

GUILLERMO CASTRO (DANCER, he/him/his), originally from San Diego, is a fourth year BFA student at UCSB. He began his formal dance training at the age of 13 and since has performed with Unity Dance Ensemble, San Diego Dance Theater, Selah Dance Collective, Nebula Dance Lab, and Santa Barbara Dance Theater as an apprentice. He is excited to perform and tour with the UCSB Dance Company for the 10-year anniversary tour.

ELIJAH HAHN-SMITH (DANCER, he/him/his) is a sophomore dance major at UCSB. He is currently an apprentice with Santa Barbara Dance Theater, UCSB’s resident professional dance company. He has previously danced work by Brandon Whited when he performed in Ragtime Suite for a 2019 Music & Dance Concert.

COLIN SNEDDON (DANCER, he/him/his) began dancing at the age of fourteen with the nationally-ranked Glendale High School Dance Team. Over four years, he won six national titles and performed in nationally televised engagements such as the 126th Tournament of Roses Parade. While dancing with the UCSB Dance Company in his sophomore year, Colin performed works by José Limón, Anna Halprin, and Andrea Miller. Since graduating with his B.F.A. in Dance, he has continued to study with Miller’s Gallim Dance (NY) to enrich his approaches to choreography and performance.

EZRANOLAN SPENCER (DANCER, they/them/theirs) is a junior here at UC Santa Barbara. Ezra began their serious dance training at the age of fifteen. In the spring of 2018, they toured six European with the UCSB Dance Company, performing works by Jose Limon, Monica Bill Barnes and others. They also just returned from NYC performing at the Dance Gallery Festival with Santa Barbara Dance Theatre. Ezra would like to thank their friends and Brandon for their continual support throughout this process. 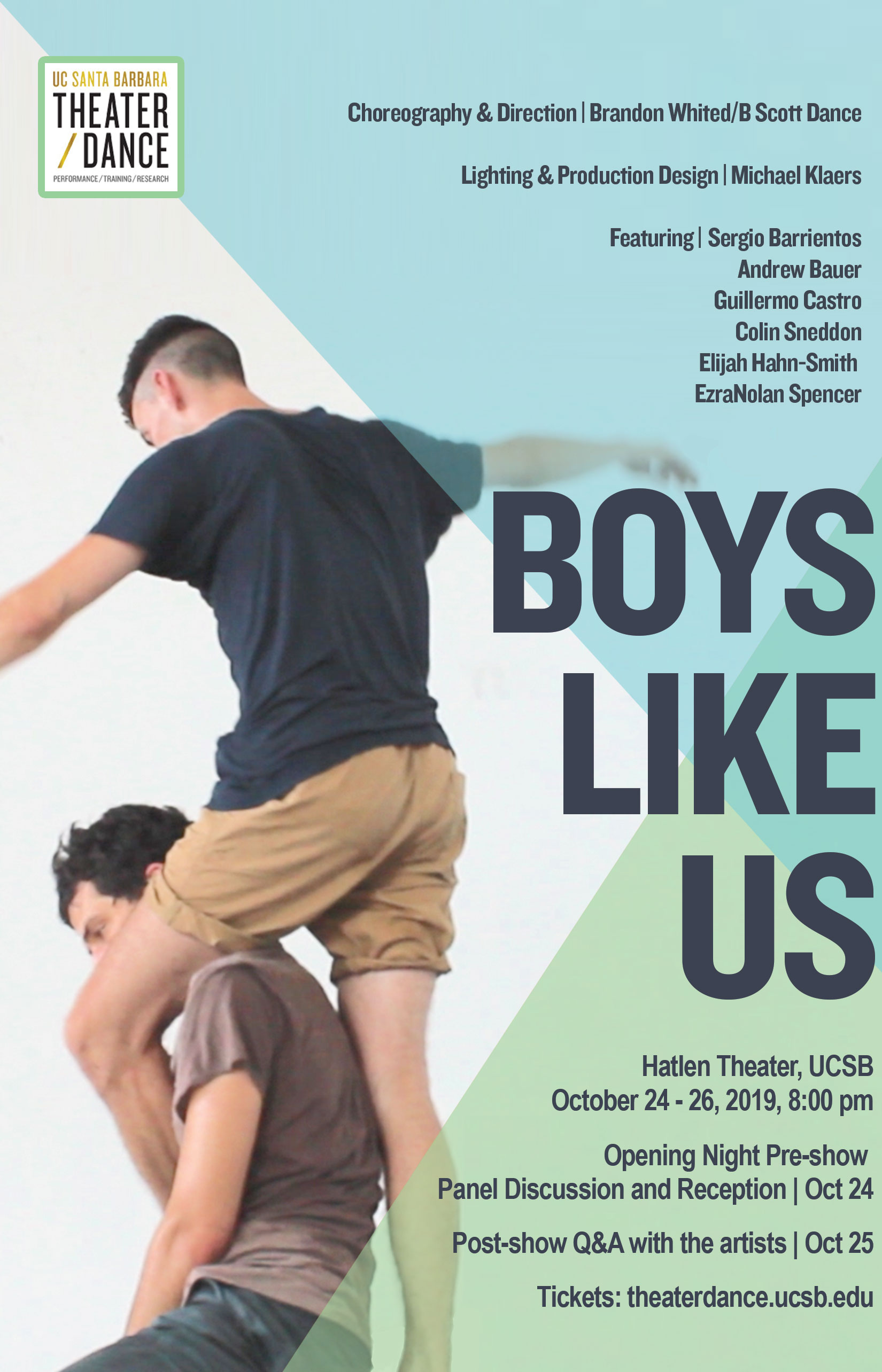 Aligning significantly with the feminist rallying call, "the personal is political," Boys Like Us offers an honest, yet abstract look at how we develop relationships to others, and perhaps even more importantly, strengthening the relationships we have with ourselves.

“I’m excited by the idea of putting people into the audience of a dance performance who don’t traditionally come to dance performances,” he added. “I think these kinds of inter-campus conversations are really vital. One of the things I want to use the series for is to make new connections between groups interested in similar issues and ideas, but who are less often in conversation because of disciplinary boundaries. Many of us are doing similar work along similar ideas.”
- The Current Article 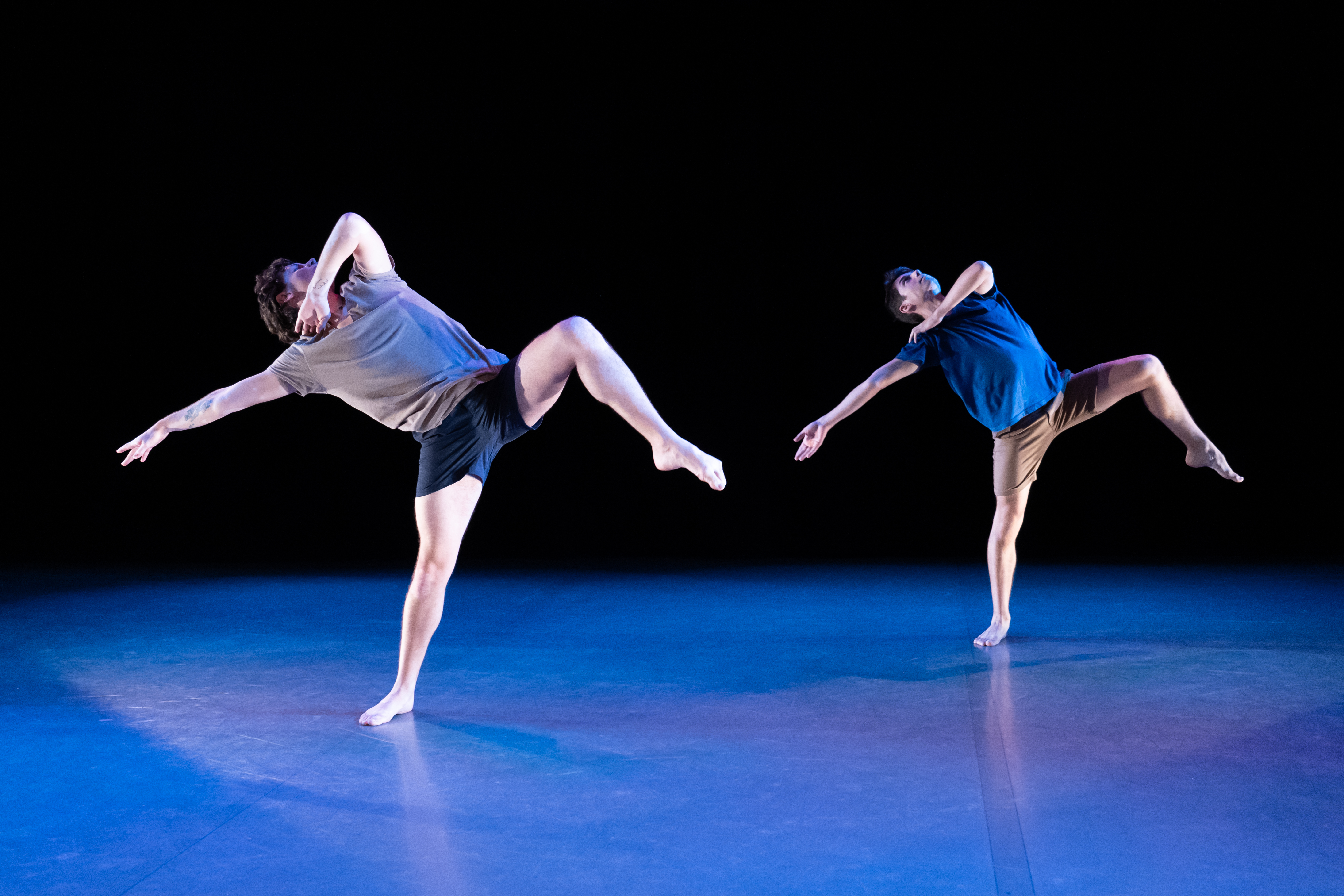 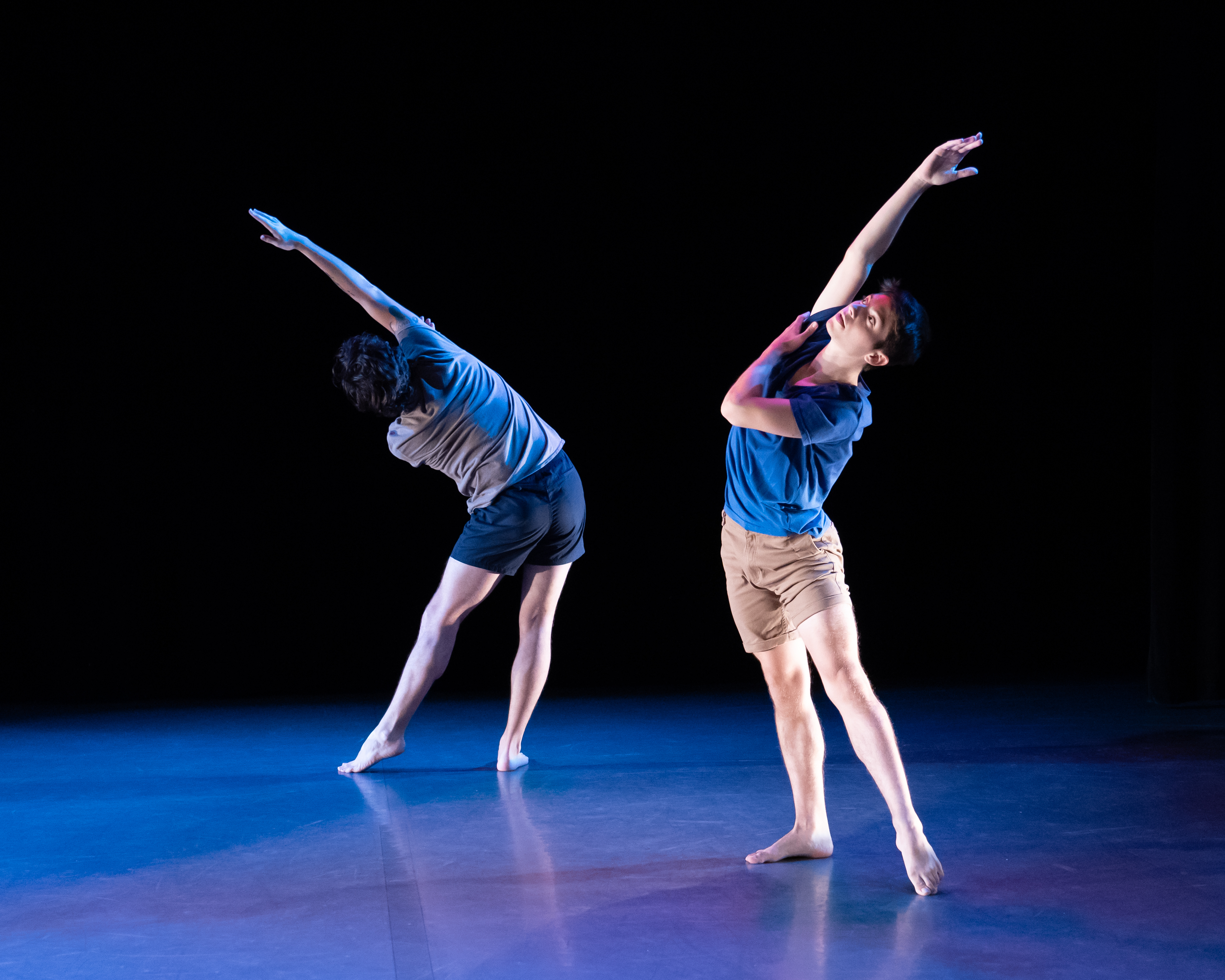