*PLEASE NOTE THAT THERE IS NO LATE SEATING. 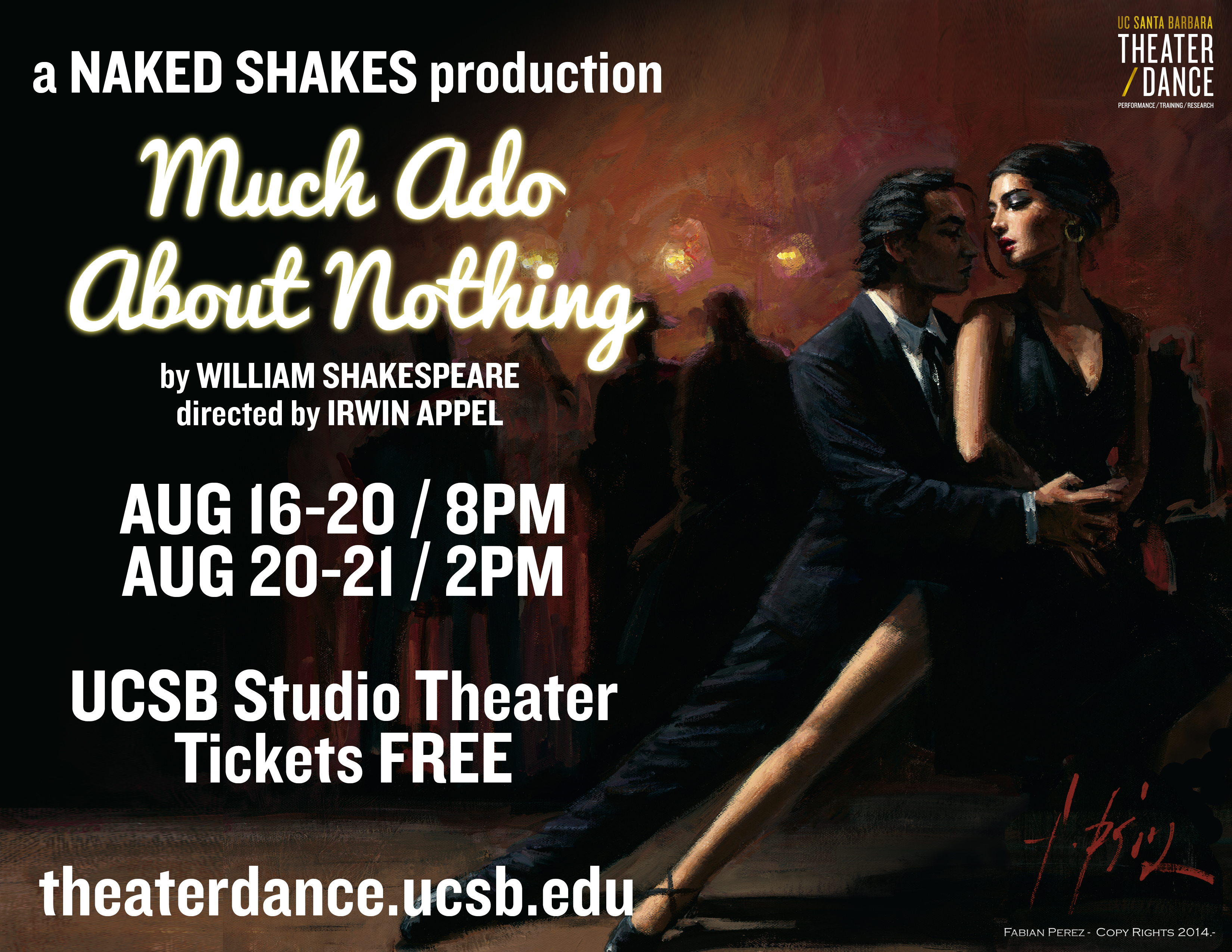 After last season’s epic saga The Death of Kings, NAKED SHAKES now turns to one of Shakespeare’s most beloved comedies and crowd pleasers, Much Ado About Nothing. This timeless story of two of literature’s all-time greatest lovers, Beatrice and Benedick, features some of the wittiest banter in all of Shakespeare. We are excited to present this story of love and devotion in our most intimate venue, the Studio Theater, for a truly “up close and personal” experience for all!

*PLEASE NOTE THAT THERE IS NO LATE SEATING.

He is also artistic director of Naked Shakes, producing award-winning Shakespearean productions at UCSB and traveling to downtown Santa Barbara and Los Angeles since 2006.  Directing credits at many theaters include:  Equivocation, Macbeth, A Streetcar Named Desire, The Merchant of Venice, Anowa, Hamlet (SB Indy Award), Measure for Measure, Romeo and Juliet, Rabbit Hole, Twelfth Night, The Winter's Tale (SB Indy Award), Seagull, The Tempest, Angels in America, Three Sisters, Comedy of Errors, Pentecost, A View from the Bridge (SB Indy Award), The Cherry Orchard, Speed-the-Plow, A Midsummer Night's Dream, The Crucible, The Countess, Madwoman of Chaillot, Sylvia, Much Ado About Nothing and the world premiere of Brown Baby (SB Indy Award for his sound design).  He also directed twice for the National Theatre Conservatory at the Denver Center for the Performing Arts.

He has also served as composer/sound designer for the Oregon and New Jersey Shakespeare Festivals, PCPA, Shakespeare Santa Cruz, Ensemble Theatre, Pan Asian Repertory, Indiana Repertory, and other regional and local theaters.  Most recently, he served as composer/sound designer for a co-production of Other Desert Cities at Arizona Theatre Company and Indiana Repertory Theatre.  He is a graduate of Princeton University and the Juilliard School.

Leonato, a kindly, respectable nobleman, lives in the idyllic Italian town of Messina. Leonato shares his house with his lovely young daughter, Hero, his playful, clever niece, Beatrice, and his elderly brother, Antonio (who is Beatrice's father). As the play begins, Leonato prepares to welcome some friends home from a war. The friends include Don Pedro, a prince who is a close friend of Leonato, and two fellow soldiers: Claudio, a well-respected young nobleman, and Benedick, a clever man who constantly makes witty jokes, often at the expense of his friends. Don John, Don Pedro’s illegitimate brother, is part of the crowd as well. Don John is sullen and bitter, and makes trouble for the others. When the soldiers arrive at Leonato’s home, Claudio quickly falls in love with Hero.

Meanwhile, Benedick and Beatrice resume the war of witty insults that they have carried on with each other in the past. Claudio and Hero pledge their love to one another and decide to be married. To pass the time in the week before the wedding, the lovers and their friends decide to play a game. They want to get Beatrice and Benedick, who are clearly meant for each other, to stop arguing and fall in love. Their tricks prove successful, and Beatrice and Benedick soon fall secretly in love with each other. But Don John has decided to disrupt everyone’s happiness. He has his companion Borachio make love to Margaret, Hero’s serving woman, at Hero’s window in the darkness of the night, and he brings Don Pedro and Claudio to watch. Believing that he has seen Hero being unfaithful to him, the enraged Claudio humiliates Hero by suddenly accusing her of lechery on the day of their wedding and abandoning her at the altar. Hero’s stricken family members decide to pretend that she died suddenly of shock and grief and to hide her away while they wait for the truth about her innocence to come to light.

In the aftermath of the rejection, Benedick and Beatrice finally confess their love to one another. Fortunately, the night watchmen overhear Borachio bragging about his crime. Dogberry and Verges, the heads of the local police, ultimately arrest both Borachio and Conrad, another of Don John’s followers. Everyone learns that Hero is really innocent, and Claudio, who believes she is dead, grieves for her. Leonato tells Claudio that, as punishment, he wants Claudio to tell everybody in the city how innocent Hero was. He also wants Claudio to marry Leonato’s “niece”—a girl who, he says, looks much like the dead Hero. Claudio goes to church with the others, preparing to marry the mysterious, masked woman he thinks is Hero’s cousin. When Hero reveals herself as the masked woman, Claudio is overwhelmed with joy. Benedick then asks Beatrice if she will marry him, and after some arguing they agree. The joyful lovers all have a merry dance before they celebrate their double wedding.

Working closely with composer and pianist John Enrico Douglas, Appel and his student cast have crafted a show that’s more than just accompanied by live Latin music; it’s saturated with the sound and feelings of the global dance floor. 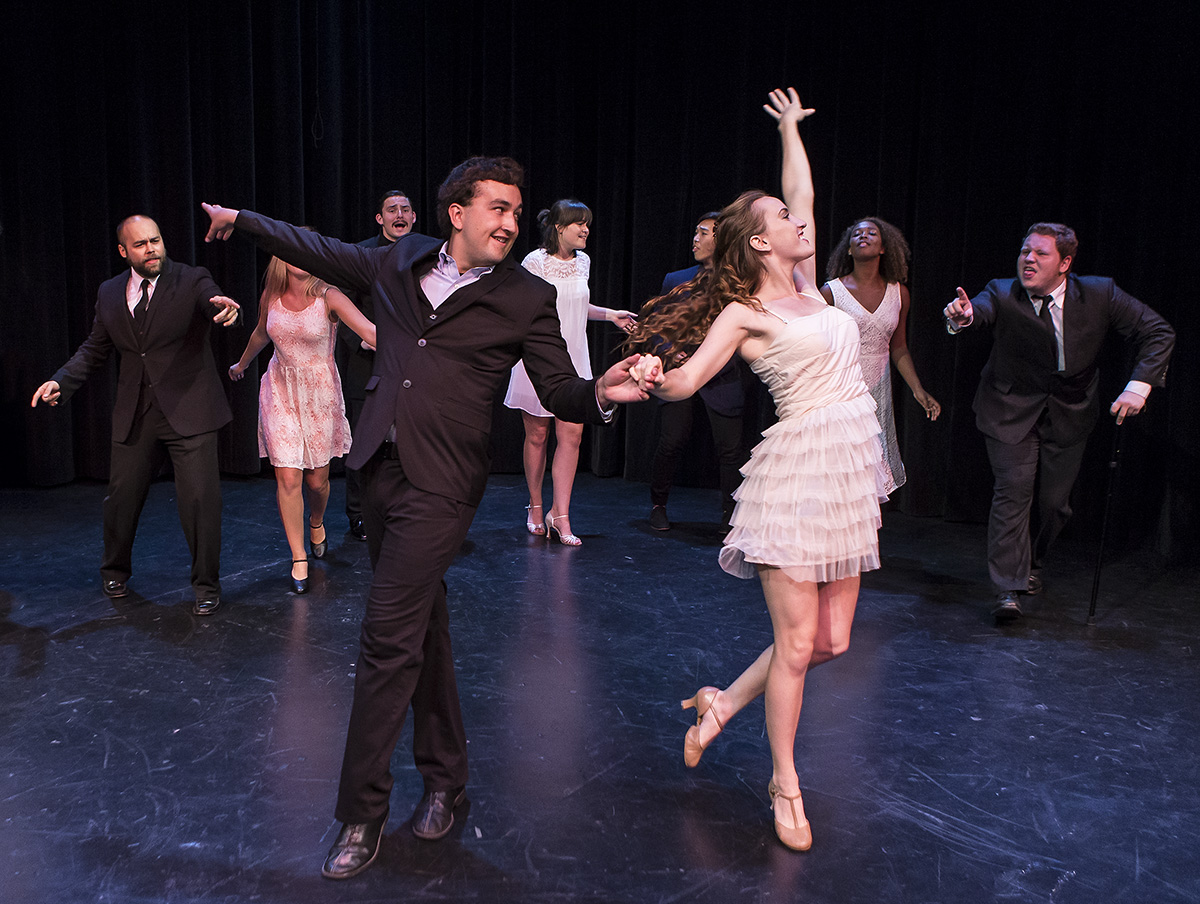 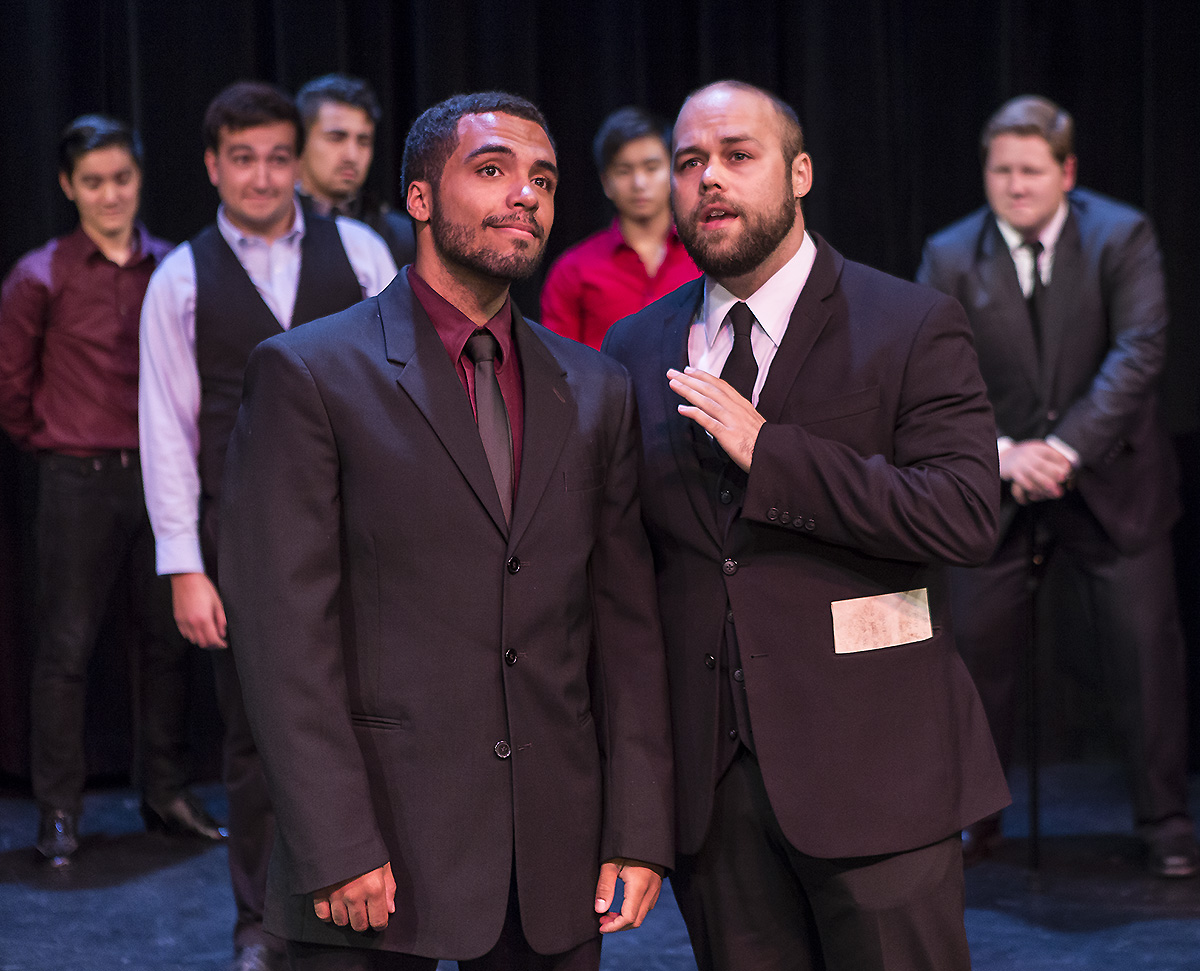 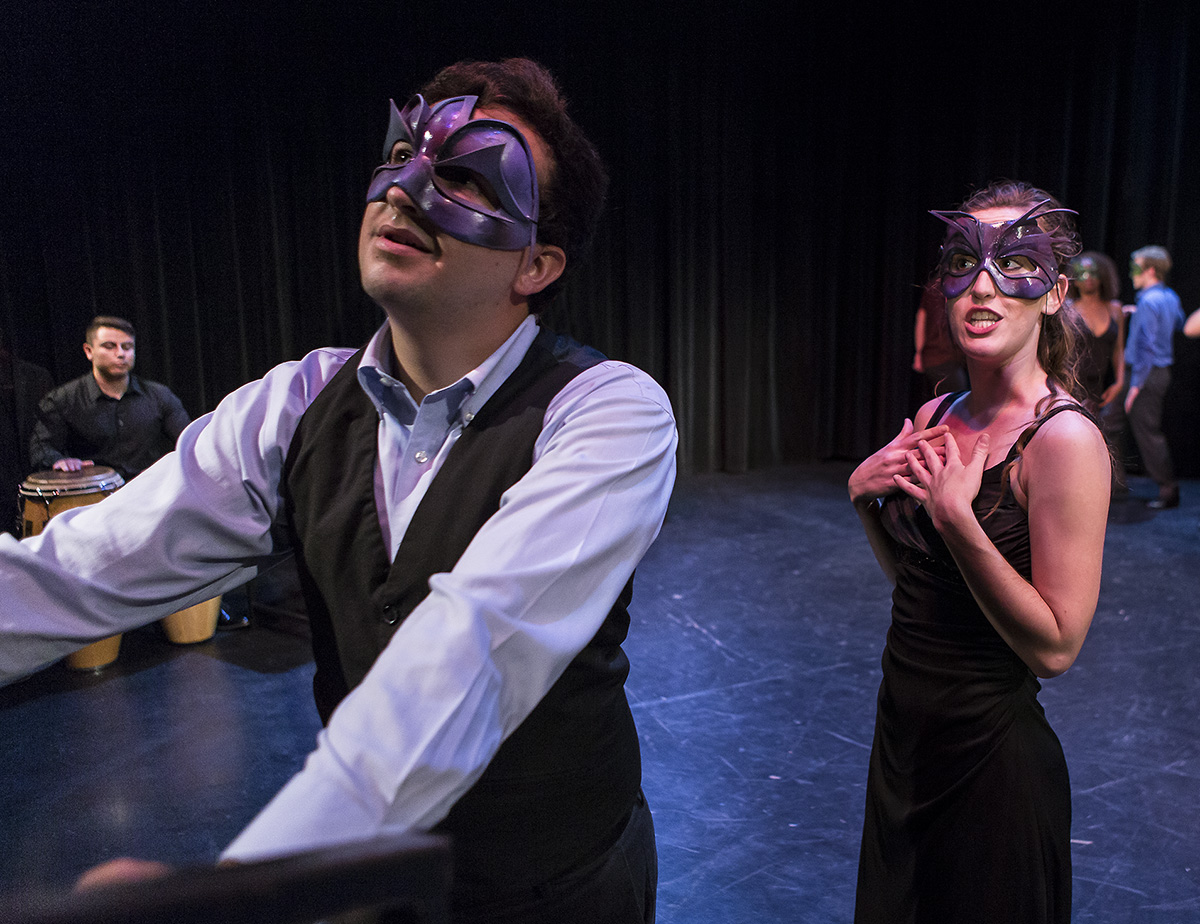 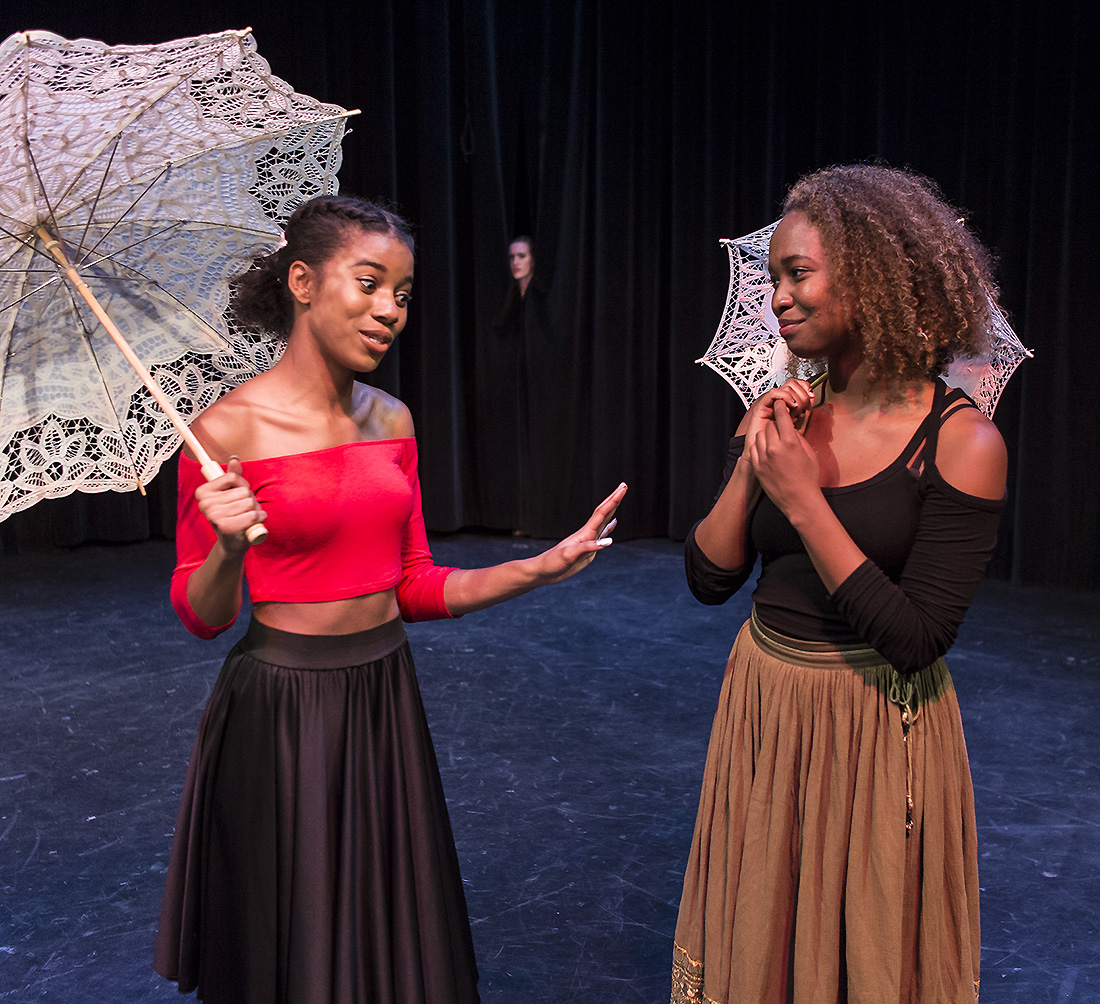 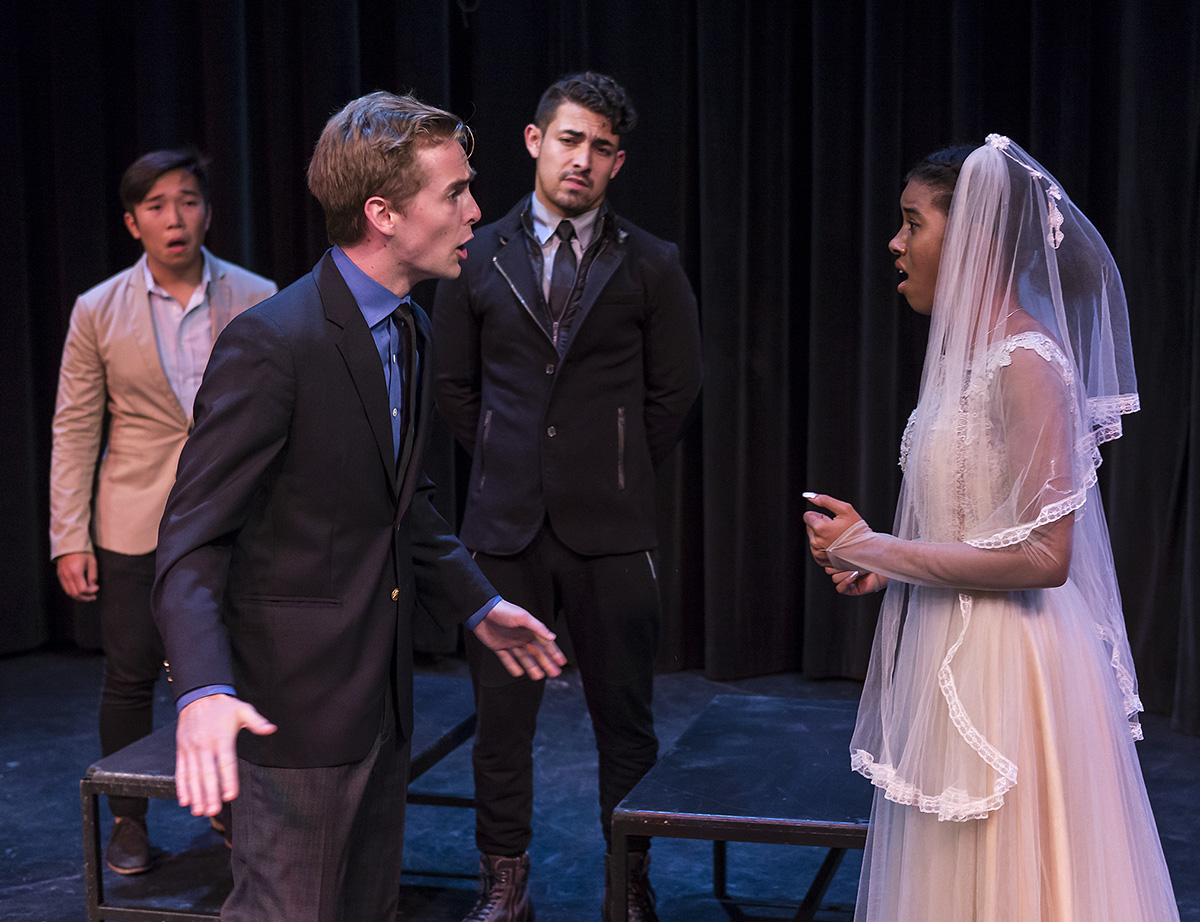 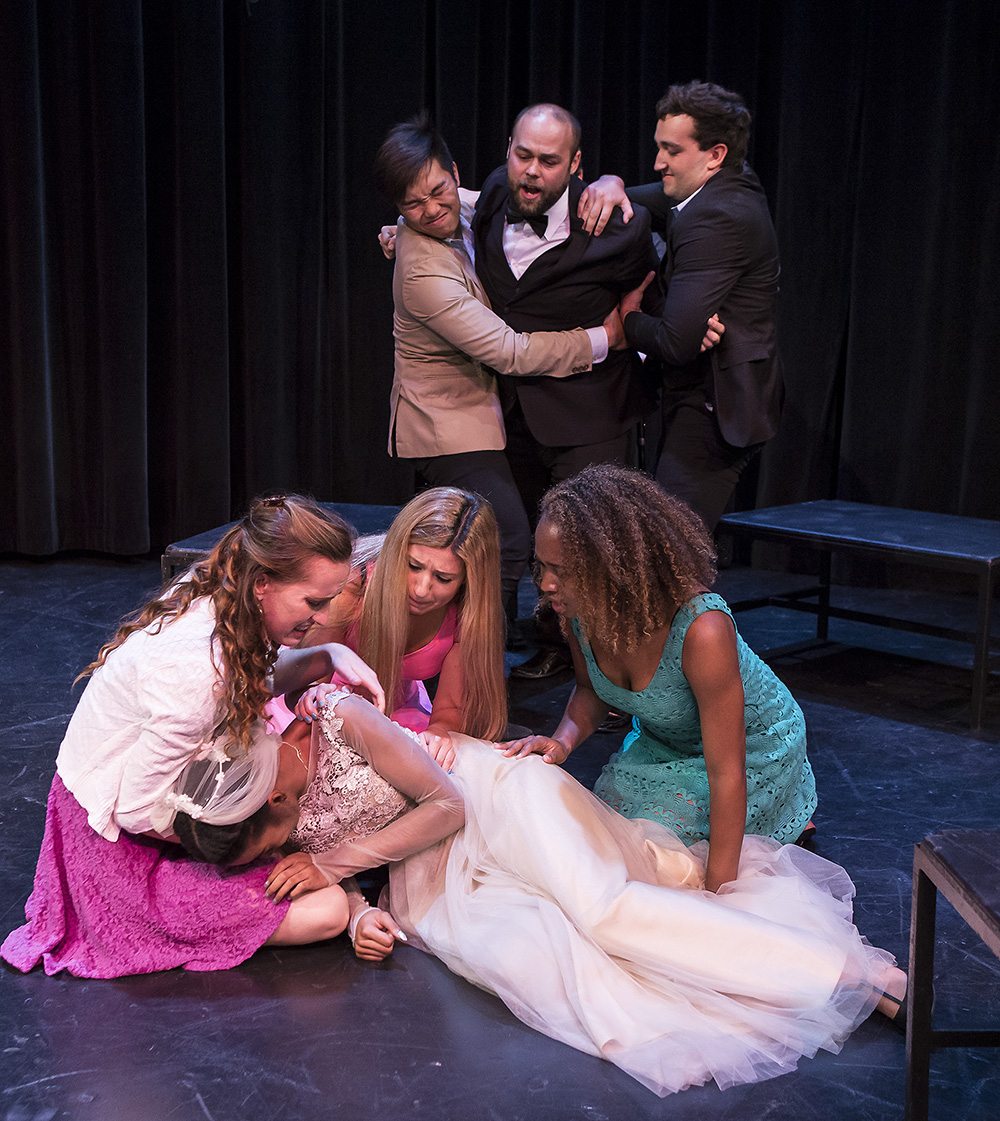 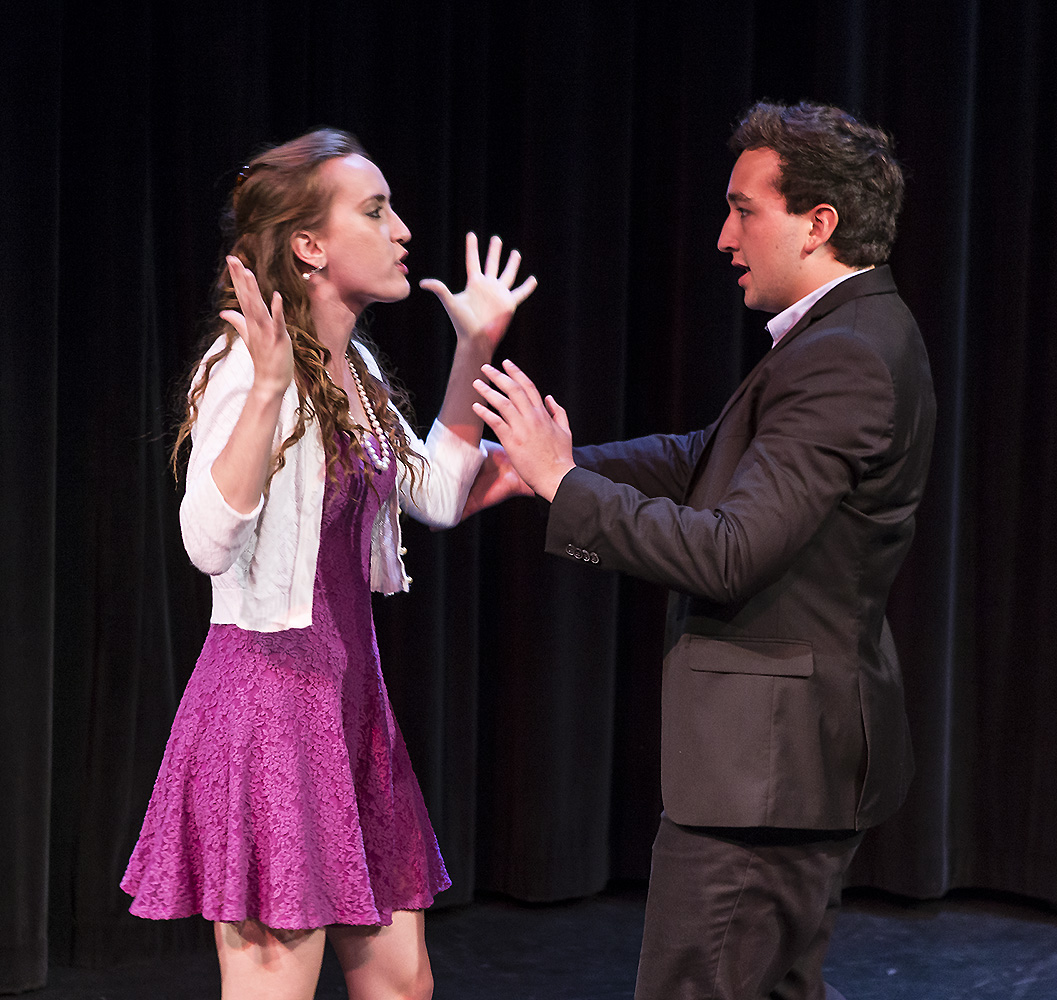 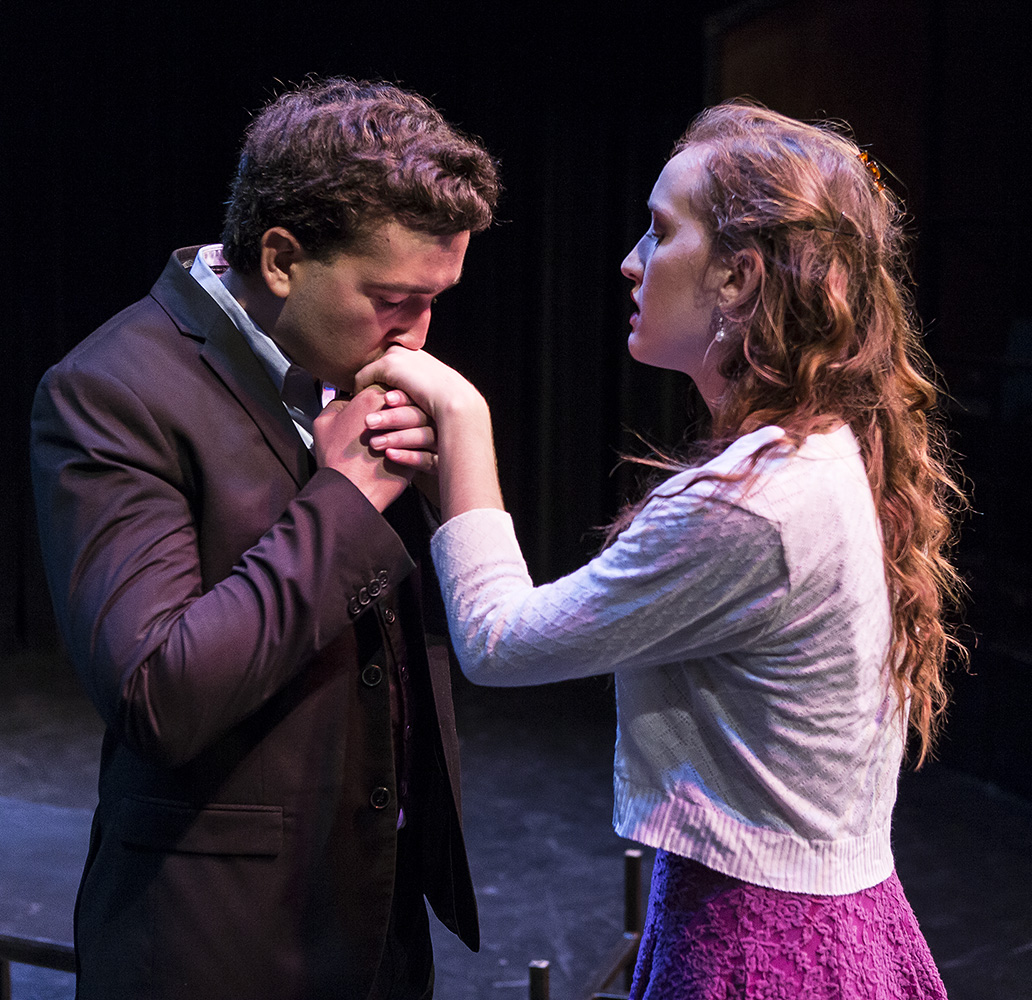 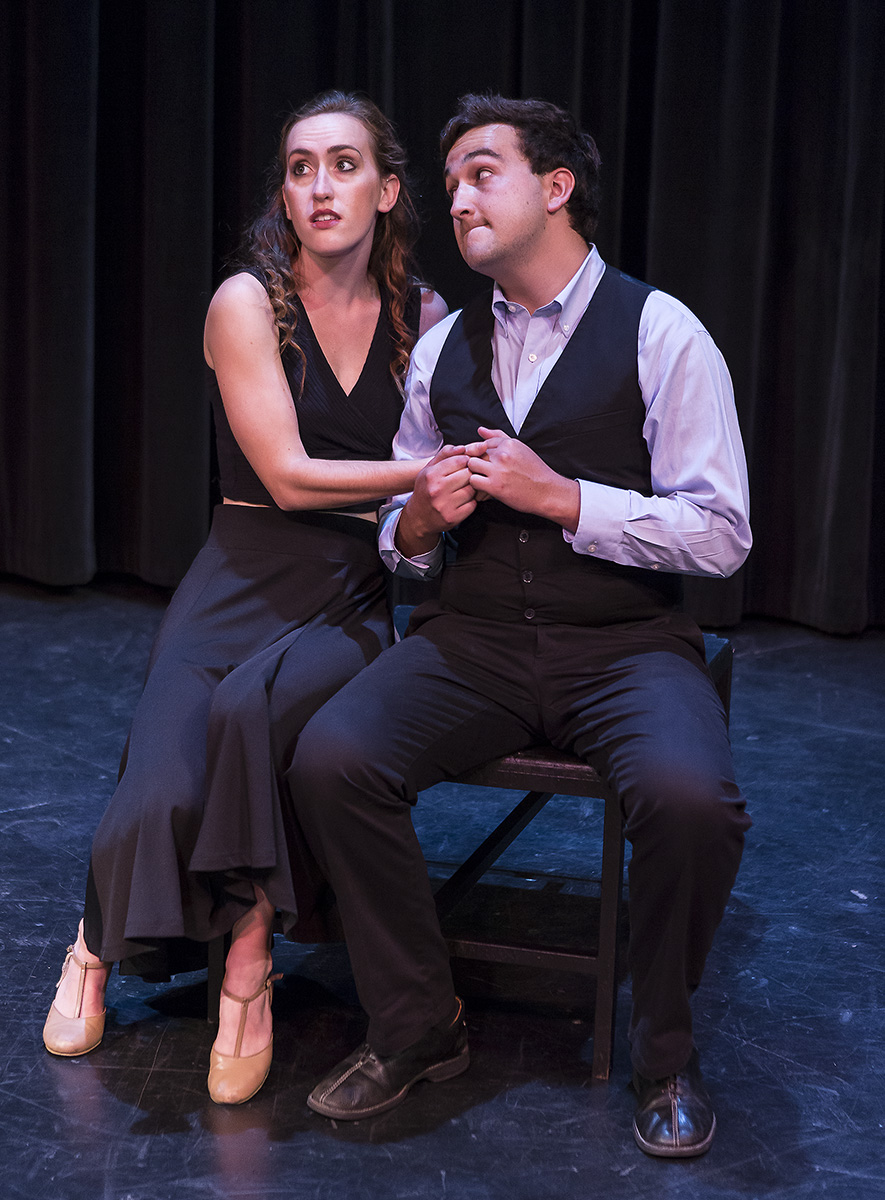 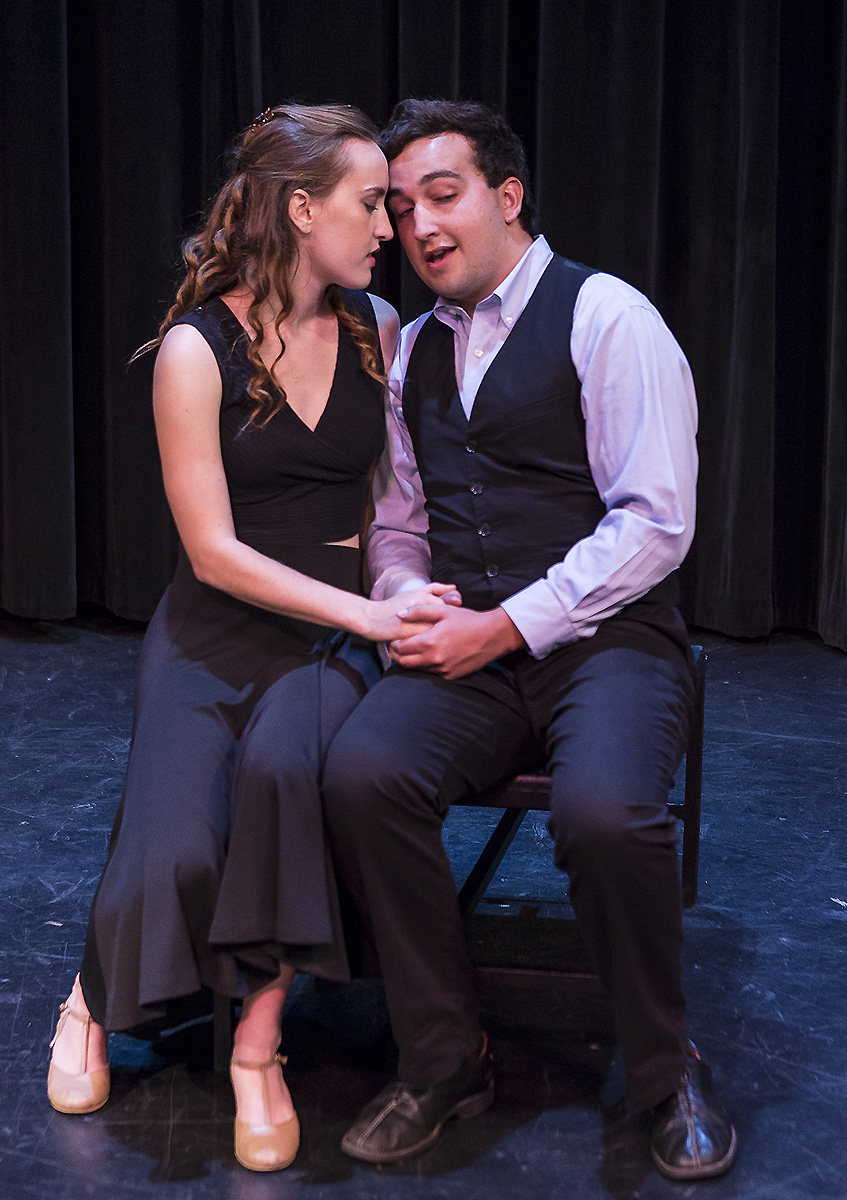